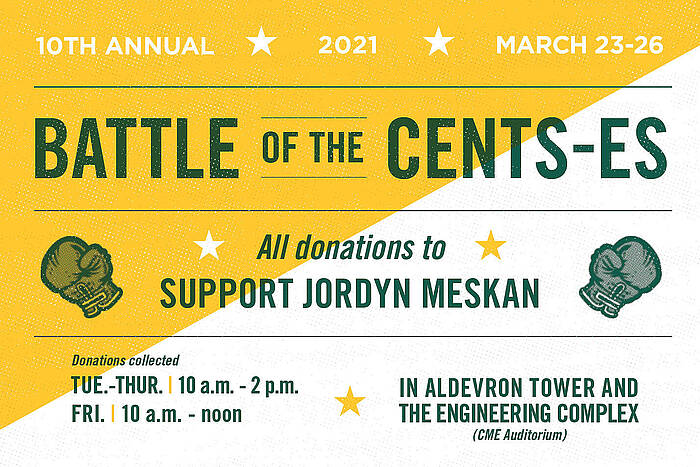 The 10th Battle of the Cents-es fundraiser will benefit Jordyn Meskan, an NDSU graduate battling a rare and aggressive form of cancer.

The annual NDSU competition between Student Ambassadors from the College of Health Professions and the College of Engineering runs from March 23 to March 26.

Donations this year can be given via coins, bills and Venmo.

Meskan is a 25-year-old with a degree in civil engineering and a minor in Spanish.  After noticing unexplained swelling on her leg in 2019, she met with several doctors and was diagnosed with alveolar rhabdomyosarcoma.

Meskan started her treatments at the beginning of the COVID pandemic, and she continues to fight after going through multiple rounds of chemotherapy, radiation treatments and surgery.

This past year during the pandemic, Meskan’s nurses told her, “Cancer doesn’t stop, and neither will we.”

NDSU College Ambassadors are excited to bring back the Battle of the Cents-es fundraiser to support Meskan through her battle against cancer.