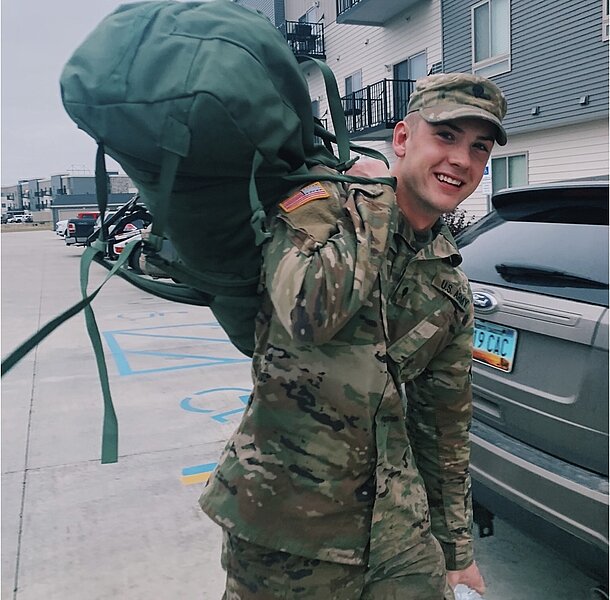 Jacob Carney, a senior majoring in strategic communication from Bismarck, North Dakota, has been a member of the Minnesota Army National Guard for the past three years.

NDSU students believe in service and many take on important responsibilities.

A great example is Jacob Carney, a senior majoring in strategic communication from Bismarck, North Dakota. In addition to his studies, he’s been a member of the Minnesota Army National Guard for the past three years.

“I joined the Guard to make a positive change in my life as I had lost a sense of purpose and internal drive,” said Cpl. Carney, noting the Guard’s service and emergency duties are in clear focus. “The Guard’s responsibilities are at the front end when you take the commitment to serve not only your country, but also your community if need be.”

This summer, the Minnesota National Guard was called to help. His unit, 2-136 HHC, assisted during the dangerous and destructive civil unrest in the Twin Cities.

“As a member of the S-2 Intelligence Section, I was able to provide insight by working with FBI and state assets, and I was also able to conduct crowd control and security operations with the line units,” Carney said. “Being a part of history with my brothers and sisters was a rewarding experience. I was able to ensure that people who were protesting for their cause were safe from outside groups with malicious intent, and also provide support to local law enforcement in a time of high tension.”

He found that his education at NDSU, in addition to his military training, proved to be an important part of his personal toolkit.

“NDSU has helped me become a more analytical person. I’m able to think from both sides of a conflict or argument – that’s a great habit my classes here have taught me,” said Carney, who hopes to land a job in the intelligence field with either the state or a contract company.

NDSU welcomes student-soldiers like Carney. The Veterans Educational Training office is ready to help, as is the Veteran Alliance Organization, known as VALOR.

“When our National Guard students do their ‘part-time, off-campus’ job, they’re involved in or training for some serious, sometimes life-threatening, stuff,” said Jim Stoddard, assistant director for veterans educational training. “A great way for us all to support their service to our communities in times of emergency is to be mindful of that, be understanding of that, and to be as accommodating as reasonably possible as they pursue their education with us.”

Put yourself on a path to success. Apply to NDSU today.