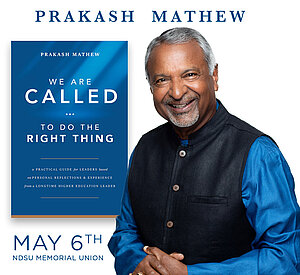 The NDSU Bookstore is set to host an author event with Prakash Mathew, emeritus vice president for student affairs, scheduled for Thursday, May 6.

Mathew’s book is titled "We Are Called...To Do the Right Thing: A Practical Guide for Leaders Based On Personal Reflections and Experience from a Longtime Higher Education Leader.”

Mathew had an exceptional 34-year career at NDSU, serving as vice president for student affairs from 2006 until his retirement in 2014. He has been associated with the university since 1976, except for a four-year absence when he was director of Residence Life at Mankato State University.

Mathew received the NDSU Blue Key Doctor of Service Award in 1996 and the NDSU Athletics Bison Impact Award in 2015. In his profession, he was recognized with several honors from the National Association of Student Personnel Administrators, including the Region IV West Distinguished Service Award and the Pillar of the Profession award in 2009, James J. Rhatigan Outstanding Dean Award in 2014 and the Scott Goodnight Award for Outstanding Performance as a Dean in 2015. An NDSU residence hall is named in his honor – the Mathew Living Learning Center.