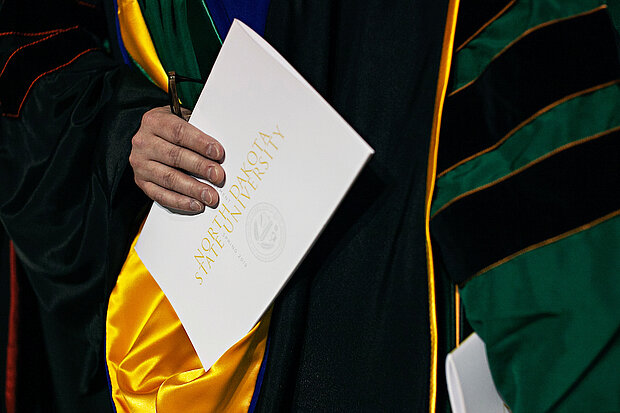 The academic apparel contemporary scholars wear dates back to medieval times and the rise of universities. Medieval scholars dressed in gowns, caps and hoods to distinguish themselves from merchants and other townspeople.

Graduate students receive hoods during a hooding ceremony at the time their degrees are conferred. The hood is a triangular fold of cloth worn over the back of the gown. The hood is faced with a color that denotes the graduate’s field of study.

Students who earn academic honors wear adornments, such as cords, ribbons and medallions, as part of their academic regalia.

Gold medallion on a red ribbon: Member of the McNair Scholars Program, which recognizes students for contributing outstanding research to their academic field and their commitment to pursuing a doctoral degree. Only 29 undergraduate students are selected to participate in the program each year.

White stole with gold embroidery: Member of Tau Sigma Delta national architecture honor society who has a 3.0 grade point average and is in the upper 20 percent of the class.

Yellow stole with letters “NDSU” and university seal (Stole of Gratitude): Worn by any NDSU student during the ceremony, then presented to a person chosen by the student who provided extraordinary support and turned a dream into a reality.