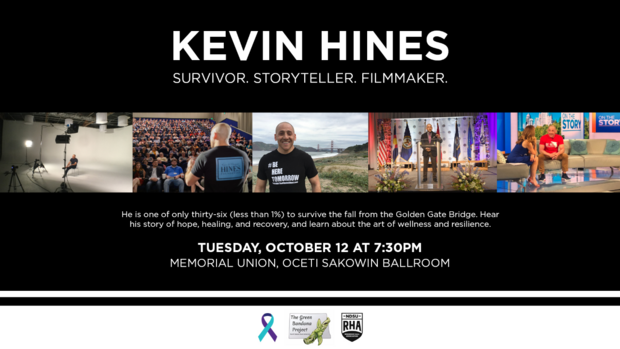 Hines is a suicide attempt survivor who tried to take his life by jumping off the Golden Gate Bridge in 2000. He now travels the world sharing his story of hope, healing and recovery while teaching people of all ages the art of wellness and resilience.

In 2013, Hines released his best-selling memoir, “Cracked Not Broken, Surviving and Thriving After A Suicide Attempt.” He has also produced a documentary titled “Suicide: The Ripple Effect.”

His story was featured in the 2006 film, “The Bridge,” by director and producer Eric Steel.

“Kevin will discuss his life, his experiences, why he made the decision he did to jump off the Golden Gate Bridge and the immediate regret he had when he did. He includes his own story of battling mental health diagnoses,” said Halie Van Vleet, nursing student and Green Bandana Project student leader. “Many people have praised his story and talks.”

Community and on-campus resource partners will be at the event to share information and materials.