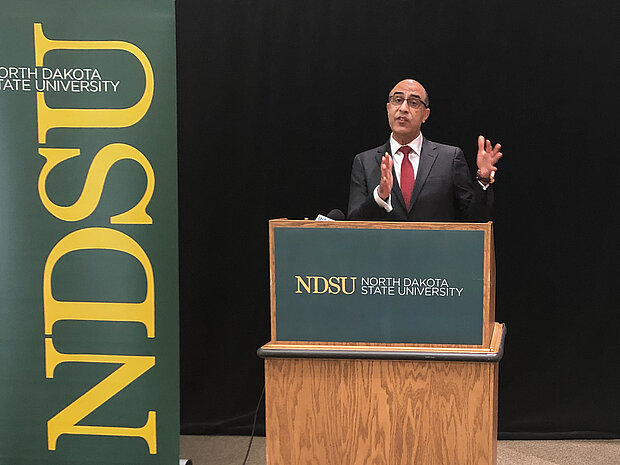 NDSU presidential candidate Hesham El-Rewini outlined his vision for the university during his open forum presentation titled “Thriving in a Changing World: Building on NDSU’s Success,” on Feb. 2 in Memorial Union’s Oceti Sakowin Ballroom. El-Rewini, the provost and senior vice president of academic affairs at Marymount University in the Washington, D.C. area, is the fourth of five candidates who will visit campus for interviews and meetings.

“Let’s pull together as one team,” El-Rewini said. “Faculty, staff, students, administrators, all of us together should be trying to figure out how to make changes to thrive. Surviving is not the goal. Thriving is the goal.”

El-Rewini said he envisions NDSU as a nationally prominent university with financial stability, a culture of excellence, and a welcoming and collaborate environment. As president, El-Rewini said he would try make to NDSU a first choice for students, faculty, staff and external partners throughout the country.

He said his previous experience has made him aware of the challenges facing many universities in the United States.

In his presentation, El-Rewini outlined his 10 guiding principles: Nurture a culture of trust; Embrace diversity and inclusion; Student success is the top priority; Faculty and staff are the university’s biggest asset; Innovate to meet societal needs of different types of learners; Continue the elevation of research, scholarship and creative activity; Engage all stakeholders; Be strategic; Grow revenue and increase incentives for innovation; Continue to cultivate success in athletics.

He said he helped UND’s College of Engineering double its enrollment by enhancing online class offerings. At the time, UND was the only North Dakota university offering online engineering options, El-Rewini said.

“I understand the importance of (educational) access, affordability and reaching people where they are,” El-Rewini said of NDSU’s land-grant mission. “I believe in taking science and research to the people, which is the core of a land grant. That resonated with me.”

“I believe that NDSU’s future is bright,” El-Rewini said. “I would be really honored if I could be part of the team that works together to make it happen.”

The NDSU Presidential Search Committee will recommend an unranked slate of finalists to the State Board of Higher Education. The board will conduct final interviews on the NDSU campus on Wednesday, Feb. 23, with the selection of the next NDSU president announced thereafter. It is anticipated that the new NDSU president will assume office in June.

For more information or to watch video of any of the candidate presentations, visit the Presidential Search web page.