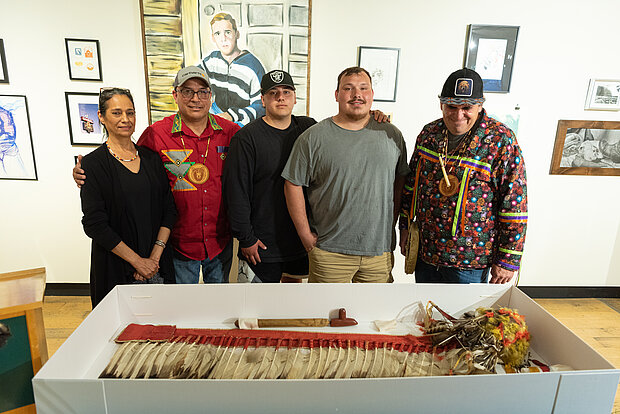 Items belonging to Chief Sees the Bear were returned by NDSU to his family on June 9, 2022, about 34 years after they were donated to the university by a former student's family.

After nearly 100 years, a headdress and moccasins belonging to Chief Sees the Bear were returned to his family after the items were found in the NDSU Memorial Union Gallery collection.

Max Defender III, a great-grandson of Chief Sees the Bear, and other members of his family were given the items in a ceremony on June 9 at the gallery.

“I can’t even explain the feeling that I have,” said Defender. “Whenever I try talking about it, it’s like I got this choking feeling. It’s an overwhelming feeling. It means a lot to us.”

In 1926, NDSU football player Claudie Miller was made honorary “Chief Sees the Bear.” Chief Mark Afraid of the Hawk and four other tribal members presented Miller with the headdress and moccasins during a Homecoming ceremony that year.

Miller’s family then gifted the items to NDSU during Homecoming 1988. Then-President Jim Ozbun received the gift on behalf of the university. The items were prominently displayed in a specially designed case in the Meinecke Ballroom for many years.

This spring, Jaclynn Davis Wallette, director of the Office of Multicultural Programs, and Anthony Faris, gallery coordinator and curator of collections for the Memorial Union Gallery, reached out to determine whether the family of Chief Sees the Bear was interested in having the items returned.

During the June 9 ceremony, Chief Sees the Bear was honored as a leader and spiritual healer.

“At that time, I don’t know what the world was like, I think people were lost,” Defender said of the period his grandfather gave away the items. “But today we’re marching back in a spiritual manner to bring these things back.”

The family returned with the headdress and moccasins to the Turtle Mountain Band of Chippewa reservation in Belcourt, North Dakota. The Standing Rock Nation is scheduled to host a ceremony on June 11 to honor the items being returned.