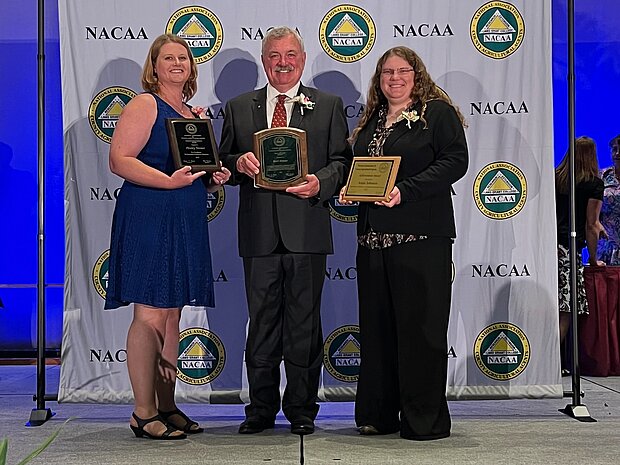 • Penny Nester, agriculture and natural resources agent, Kidder County – awarded national Distinguished Service Award for long-term excellence in Extension. The award recognizes the top 2 percent of NACAA members with 10 or more years of experience as chosen by their peers and the directors of Extension of various states.

The NACAA Hall of Fame Award recognizes four members across the nation for their Extension programming, state and national association activities and humanitarian efforts. Hoppe is only the second North Dakotan to be selected for the NACAA Hall of Fame.

“It is humbling to be honored for doing what I enjoy – helping people,” Hoppe said.

Hoppe joined NDSU Extension in 1990 as an Extension associate at the Carrington Research Extension Center. In 1992, he became an Extension specialist focusing on beef cattle nutrition and management for cow-calf and feedlot. He has conducted cattle feedout projects for more than 28 years and has worked with ranchers to develop a cattle finance cooperative, cattle feeding partnerships and cattle slaughter and processing businesses.

Hoppe’s outreach and NACAA leadership at the state and national level have earned him numerous awards and recognition. His involvement in farming, conservation and sustainability led to an appointment as the Sustainable Agriculture Research and Education state coordinator for North Dakota.

“During his career, Karl has demonstrated tremendous commitment, not only to agricultural producers, but also to fellow Extension agents and specialists,” said Jeff Gale, Extension agent in Foster County. “As a new agent, I consider him an outstanding role model and mentor.”

Johnson started at NDSU Extension as an agriculture and natural resources agent in Steele County in 2015. She provided programming on beef and sheep production and soybean cyst nematode sampling. She also co-created a nationally recognized biosecurity in agronomic equipment curriculum and implemented a 4-H shooting sports program. She now is the statewide Extension farm and ranch safety program coordinator.