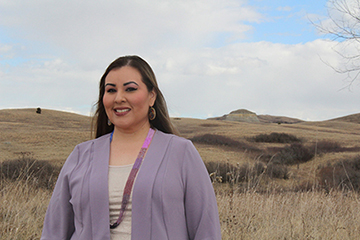 O’Berry, a Hidatsa/Dakota and enrolled member of the Mandan, Hidatsa and Arikara Nation, is pursuing her doctor of nursing practice degree at NDSU Nursing at Sanford Health in Bismarck, North Dakota. In her nursing practice, O’Berry is passionate about serving diverse populations, including veterans with PTSD and adolescent Native Americans.

In the future, O’Berry would like to focus on providing care to veterans and their families as they reintegrate into their homes post-war, having known returning soldiers who have faced these challenges. For Native American adolescents, she would like to develop a model that allows providers to reach young Native Americans before health challenges become acute and more difficult to treat.

As an undergraduate student, O’Berry was accepted into a Summer Training Opportunities in Child Development and Mental Health program at Yale University, New Haven, Connecticut. She was one of 12 individuals selected from a record number of applicants for the summer program of the Yale Child Study Center of the Yale University School of Medicine. The training provided an introduction to child development and child mental health.

O’Berry also was selected to participate in the Maternal and Child Health Careers/Research Initiatives for Student Enhancement. Managed by the Kennedy Krieger Institute and funded by a grant from the Centers for Disease Control and Prevention, the program provides training to help eliminate health disparities and promote health quality. O’Berry’s training in the program occurred at Johns Hopkins Medical Institute, Baltimore, Maryland and at the CDC in Atlanta, Georgia. She also interned at Sanford Research in Sioux Falls, South Dakota, working with the Coordination of Rare Diseases (CoRDS), an international patient registry for rare diseases, with the goal to advance treatments and cures.

In pursuing her undergraduate degree in nursing, O’Berry served as president of the Student Nursing Association and vice president of the Student Nursing Association of North Dakota. Additionally, she started and served as president of the Multicultural Club in the School of Nursing. The mission of this club is to empower student nurses to provide culturally sensitive care and incorporate such knowledge into their nursing practice. Upon graduation, O’Berry received the Outstanding Graduate Award.

“She developed an interesting and relevant nursing model from a cultural perspective,” said one nursing faculty member in O’Berry’s nomination. The nominator noted that O’Berry’s family has a long history of traditional healing in Native American culture, which makes her exceptional as she understands and respects traditional practices and nursing practice.

“North Dakota is her home and I believe she will make an enormous impact on the people that she desires to serve,” said a faculty member in the nomination.

O’Berry currently works as a nurse in the psychiatric unit at Sanford Health, Bismarck. She also serves as a consultant and participant in an upcoming documentary titled, “Essence of Healing:  Journey of American Indian Nurses,” which will premier April 30 at the North Dakota Heritage Center in Bismarck. The program details the lives and impact of American Indian Nurses from North Dakota, with a goal to promote the recruitment of American Indians into the nursing profession, where they currently make up less than two percent of the nursing workforce.