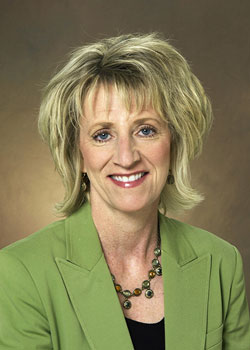 The award honors nurses who provide exceptional leadership in an executive role for nursing. Nominations for the award are made by their peers in the nursing community in North Dakota.

With 29 years of experience as a nursing professor, Gross is passionate about nursing education. She began her career as a critical care nurse, obtaining clinical expertise in neuro-surgical, medical-surgical, and cardiovascular intensive care.

Gross began her academic career as an associate professor in the Tri-College University Nursing Consortium in Fargo, North Dakota in 1987, teaching in her area of passion–critical care. She became certified as a clinical nurse specialist in medical surgical nursing in 1991. Gross was promoted to associate professor at NDSU in 2004. She was appointed as Nursing Department chair at NDSU in 2011, and was promoted to associate dean in the NDSU School of Nursing in the College of Health Professions in 2015.

Since her appointment as chair in the School of Nursing, Gross has provided leadership to:

Gross provided leadership in NDSU’s School of Nursing to create and implement a comprehensive program evaluation plan, successfully complete program approval at NDSU, acquire continued approval from the North Dakota Board of Nursing, and acquire continued accreditation for the bachelor’s of science in nursing and doctor of nursing practice programs from the Commission on Collegiate Nursing Education. She worked with NDSU faculty and staff to design a new state-of-the-art simulation center and new skills lab for nursing students. In addition, she worked with colleagues in pharmacy to develop and teach the Interprofessional Health Care course within the College of Health Professions.

Gross notes that the teamwork of faculty and the achievements of students help drive everyone’s opportunity for success. "They know they can make an important difference in the lives of patients and families and they do," Gross told a reporter who interviewed her earlier this year about the shortage of nurses in the state.

She spent the first 24 years of her academic career inspiring nursing students, teaching critical care and instructing critical care clinicals. She has received many teaching awards during her career, including:  Outstanding Faculty Member for Tri-College University; Excellence in Education Award from Xi Kappa-At Large Chapter of Sigma Theta Tau; Preferred Professor from the NDSU Golden Key Honor Society; Preferred Professor from the NDSU Mortar Board; Apple Polisher Award from the NDSU Bison Ambassadors in 2001, 2008 and 2011; and the Mary Berg Award for Excellence in Teaching in the College of Pharmacy, Nursing, and Allied Sciences in 2011.

In addition, she has served in other leadership roles in the College, including: chair of the Curriculum Committee; chair of the Admissions and Academic Progression Committee; leadership during the accreditation process with the National League of Nursing and Commission on Collegiate Nursing Education, as well as obtaining program approval from the North Dakota Board of Nursing. Gross has served as a regional leader in Sigma Theta Tau and the North Dakota Nurses Association. She was selected “Nurse of the Year” by District IV of the North Dakota Nurses’ Association in 2006.

Gross obtained her master’s degree in Nursing Education from the University of Kentucky, Lexington and was the recipient of the UK Graduate Faculty Award for Academic Excellence. She received her Ph.D. in adult education from NDSU in 2011. Her most recent research focuses on interprofessional education in health care disciplines.