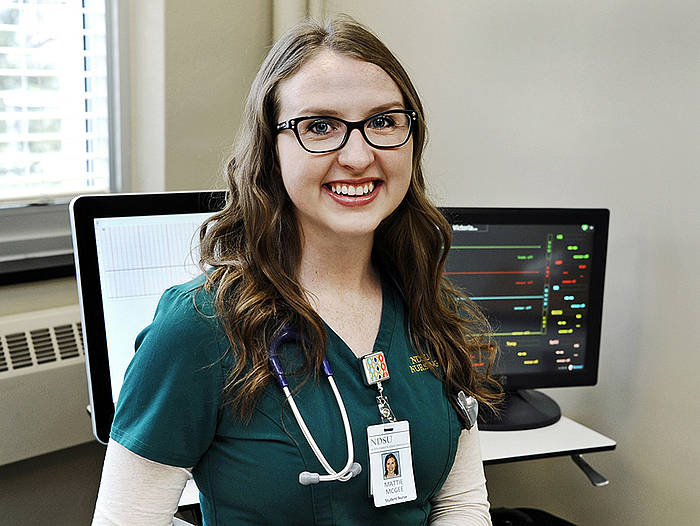 December 8, 2016 – Fargo, North Dakota – Mattie McGee has been named the NDSU School of Nursing’s Student Nurse of the Year for the 2016-17 academic year.

McGee is a junior nursing student and active member of NDSU’s Student Nurses Association.  She also serves as vice president of the College of Health Professions Ambassadors. In addition, McGee has served as a Bison Tour Guide and a member of the Saddle and Sirloin Club at NDSU.

“I am so humbled to have even been nominated for Student Nurse of the Year,” said McGee. “There are so many nursing students that deserve to be recognized for their hard work and determination in this program. It is an honor to be Student Nurse of the Year, but even more of an honor to have the privilege to represent NDSU and the amazing nursing students enrolled here.”

McGee said she chose NDSU’s nursing program for several reasons. “I chose NDSU, first off, because I fell in love with the campus and the home-like feeling. I also knew that NDSU had a challenging, but very respected nursing program and that intrigued me,” said McGee.

“Throughout my four semesters in the nursing program, I have learned that our instructors want nothing more than for us to fully succeed in our future nursing careers,” she said.

McGee is originally from Bowman, North Dakota, a town with a population of 1,600 in the southwestern part of the state. She grew up on the family farm. Her parents, who co-own a mechanic shop, have been strong supporters of her career goals, according to McGee.

She developed an interest in health professions at an early age, first serving as a dietary aide in her hometown nursing home while in high school. McGee then took a class to become a certified nursing assistant in the nursing home, but she didn’t stop there. She trained to become an emergency medical responder for the community ambulance squad. By age 18, she was serving on the local emergency response team in her hometown.

“You have to be able to hold your own in stressful situations,” said McGee. “You have to think quick. You’re working with other team members right away. It’s kind of cool to see how the EMS system works, then into the hospital system when we’re transferring patients in. You get to see all sorts of different aspects of all types of health care.”

When she goes home, she often still volunteers as an emergency medical responder in Bowman. “Getting your first call—you hear your beeper go off and you’re jumping out of bed and just ready to go!”

Her older brother set an example, serving as an emergency medical technician and nurse who is now pursuing his degree as a nurse anesthetist. Mattie said health care seemed a natural career choice, since she didn’t think the other family tradition of being a bullfighter like her dad or a bull rider like her uncle would be something in which she could excel.

McGee admits she likes a challenge and likes to stay busy. In addition to school, she works as needed as a certified nursing assistant on a medical surgical floor of a Fargo hospital, and spends 10 hours per week working at a childcare center with infants and toddlers.

Some of McGee’s future plans are already in place. She hopes to pursue a nursing career in a hospital emergency room or neonatal intensive care unit when she graduates in December 2017. Her fiancé is in the military, so she will apply her future nursing degree in a health care setting wherever they are stationed.

Student Nurse of the Year candidates are nominated by NDSU faculty. Fellow students vote for the top three candidates and professionals in the community make the final selection.

The NDSU School of Nursing in the College of Health Professions provides bachelor’s and graduate nursing education to advance knowledge of nursing, demonstrate leadership, and meet the needs of a diverse society. Campus and online classes are offered, with locations in Fargo and in Bismarck.