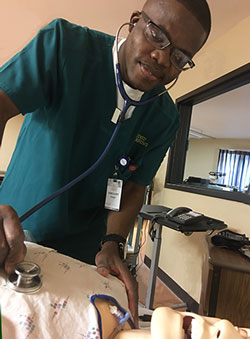 Sometimes the path to a destination becomes more of a winding road rather than a straight line. Kokou’s journey to become a nurse began more than 6,300 miles from Bismarck, North Dakota.

Gregory Kokou Dogan began his journey in the Togolese Republic of West Africa. With an immediate family of nine and extended family of 26, circumstances were difficult. Taking on responsibility to help his family survive came at an early age. He went to school and he worked for income to help his brothers and sisters.

“Many of my friends, relatives and brothers and sisters call me the Samaritan, because I am a person who can share the little bread with anyone who is in need,” said Kokou. “I finished high school in 2002, and went to university in Lomé, West Africa.”

Kokou began studying biology, but going to school and working took a toll. He then switched to studying acupuncture and reflexology. Life moved forward. He married in 2004 and he now has a family of four children. By 2007, his path would take another turn as he sought a more stable life for his family.

After coming to the United States in 2007, he later became a naturalized U.S. citizen. During that time, he worked to support his family who waited to join him and to pursue his dream of nursing.

“The desire to be a nurse comes from my nature to be sensitive to others in need, and be able to show empathy, kindness and love without waiting for anything in return,” said Kokou.

He is grateful for opportunities he received while he worked at Cardinal IG, an insulating glass manufacturing facility in Fargo. Kokou began going to technical school to once again pursue his dream. He found that working full time, family responsibilities and attending school were a difficult balancing act, as he continued to use his earnings to help support his family and siblings.

“All those things I mentioned about which could be a barrier for many people to stop following their dreams, they did not stop me to continue on the same road to become a nurse,” said Kokou.

He served as a leader for a Togolese community in Fargo. He is a certified French translator. He began working as a certified nursing assistant in the Sanford Health ICU in Fargo. Kokou wanted to help his family and his community.

There are more than 4,000 RN job openings and more than 1,300 LPN openings projected through 2024 in North Dakota. The data comes from ND Labor Market Information Center Employment, Education and Training Projections.

While nursing programs in the region are working to help address that need, the number of qualified applicants can far outnumber the slots that are available for education and training.

Yet again, Kokou would adapt to find a way to pursue his dream. He decreased the number of hours he worked so that he could focus on meeting the rigorous academic criteria that nursing programs require. He moved to Bismarck in 2015 to complete his degree.

He is honest about the commitment, sacrifices and strain on family that pursuing the dream has entailed. But he is proud of the sheer hard work and determination he has exhibited to make a better life for him and his family.

“Finally, I am on my way to achieve my dream career, and to start to serve my communities,” said Kokou. “I did not have any family or relatives when I came to America in 2007. And, wherever I find peace and happiness, will become my hometown. Today, Bismarck, North Dakota has become my hometown.”