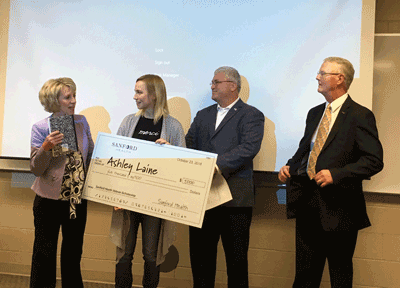 North Dakota State University nursing student Ashley Laine received a $5,000 surprise when a group of people walked into her morning class. Laine, a third-year nursing student in the NDSU School of Nursing, was awarded the first ever Sanford Health Military and Veteran Scholarship.

Paul Weckman, director of Sanford Health’s Department of Veterans and Military Services, presented the scholarship award on Wednesday in front of a surprised Laine and her classmates.

“She exceeded in every criteria we were measuring,” said Weckman. “We had a panel and unanimously across the board, Ashley stood out. I’m amazed at everything she’s done in a short period of time.”

Laine grew up on a farm in Osage, Minnesota. In addition to working toward her nursing degree, she is a network warfare analyst, and staff sergeant for the Air National Guard in Fargo, North Dakota.

The scholarship was a surprise. “I was shocked! I could have cried. I’m grateful to say the least,” said Laine.

“I’ve known since I was really young that I wanted to be in the military. I have an older brother in the Army. I have memories of being young and going into the basement and putting his uniform on,” said Laine. “As soon as I turned 18, I joined and that service for other people has translated into everything that I do. With nursing even, it’s something that I always knew that I wanted to do.”

Laine was deployed in 2016 to Qatar in support of Operational Freedom Sentinel. Her military achievements include receiving the Global War on Terrorism Expeditionary medal, Air Force Outstanding Unit Award, National Defense Service Medal and the 2016 North Dakota Airman of the Year.

On the dean’s list every semester of her college career, Laine is currently doing her clinical nursing experience at the Fargo VA Health Care System. She also volunteers her time for the Minnesota Autism Center, Habitat for Humanity and the Salvation Army.

In her essay for admission into the NDSU nursing program, Ashley stated “The Air Force has three core values:  integrity first, service before self, and excellence in all that you do. I pride myself in the application of these values in my daily life,” said Laine in her application.

“Based on feedback from faculty and fellow students in the School on Nursing, Ashley carries out these values in everything she does,” said Carla Gross, associate dean and chair of the NDSU School of Nursing, Fargo. “She is a stellar, highly intelligent student who is on an amazing journey to become an exceptional nurse,” said Gross.

In receiving her scholarship, Laine also noted that her fellow classmates help drive each other to excellence.

“To be noticed among them is a huge honor because they all would have been deserving of this award,” she said.

With sites in Bismarck and Fargo, the NDSU School of Nursing offers accredited programs to part- and full-time students, working professionals and students seeking online educational opportunities. As part of the NDSU College of Health Professions, the School of Nursing also is a ROTC Center of Nursing Excellence.