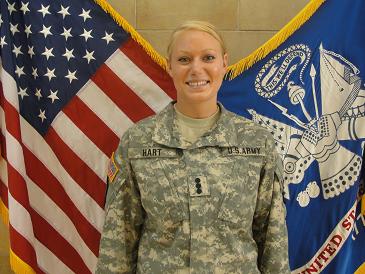 Cadet Jodi Hart is a senior in the NDSU Army Reserve Officer Training Corps (ROTC) and is majoring in Nursing. Jodi has excelled in all three phases of the military science program consisting of physical fitness, academic excellence and leadership development. Jodi’s exceptional performance in all three aspects of the program led to her selection as one of the nation’s top nursing students within the ROTC program. As a result, Jodi received her first choice of duty assignment and selected Madigan Army Medical Center on Fort Lewis, Washington. Jodi also was selected to be a participant in the US Army’s Nurse Summer Training Program last summer, where she spent several weeks working at Madigan Army Medical Center applying the skills and knowledge she has learned here at NDSU in the Nursing program.

Last spring, Jodi received the Association of the United States of America Military History Award. This award is given annually  to  an ROTC Cadet of junior standing that is in top 10% in ROTC, top 25% in academic grades, and contributed the most through leadership to advance the Army Military Science Department at NDSU. Jodi was also recently selected as the recipient for the distinguished Daughters of the American Revolution Award. This award is presented annually to a Senior Cadet of the graduating class that is in the top 25% of ROTC and Academics; demonstrated qualities of loyalty, patriotism, dependability and good character; adheres to military discipline; possess leadership ability and fundamental and patriotic understanding of the importance of ROTC training.

Jodi will commission as a second lieutenant in the Nurse Corps of the US Army in May and will attend her Nurse Officer Basic Course in Fort Sam Houston, Texas later this summer.