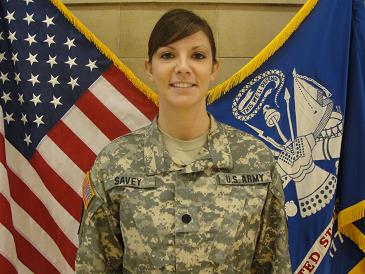 Cadet Stephanie Savey is a junior in the NDSU Army Reserve Officer Training Corps (ROTC) and is majoring in Nursing. Stephanie also excels in all three phases of the military science program consisting of physical fitness, academic excellence and leadership development. Stephanie’s diligence and desire to learn has resulted in her selection as a participant in the highly competitive US Army’s Nurse Summer Training Program for this summer. In Spring 2009, Stephanie was recognized at the Tri-College Army ROTC Awards Ceremony by receiving the Reserve Officers Association Bronze Award. This honor is awarded to a Sophomore Cadet in the top 10% of ROTC and demonstrates outstanding potential as an officer in the US Army.

Stephanie’s exceptional work ethic and unwavering commitment to both the Nursing and ROTC programs here at NDSU led to her selection as this year’s Military Order of the World Wars Silver Award. This honor is awarded to an ROTC Cadet who excels in all military and scholastic aspects and who demonstrates a strong desire to pursue a career as a US Army officer.  Stephanie will graduate from the Nursing program in May of 2011 and will attend the Leader Development and Assessment Course at Fort Lewis, Washington following graduation. Upon completion of that course, she will commission as a second lieutenant in the Nurse Corps of the US Army and will attend her Nurse Officer Basic Course in Fort Sam Houston, Texas later that same summer.