It was a personal experience that led Alyssa Beck, a Bismarck, North Dakota native, to pursue her nursing degree at NDSU School of Nursing at Sanford Health. 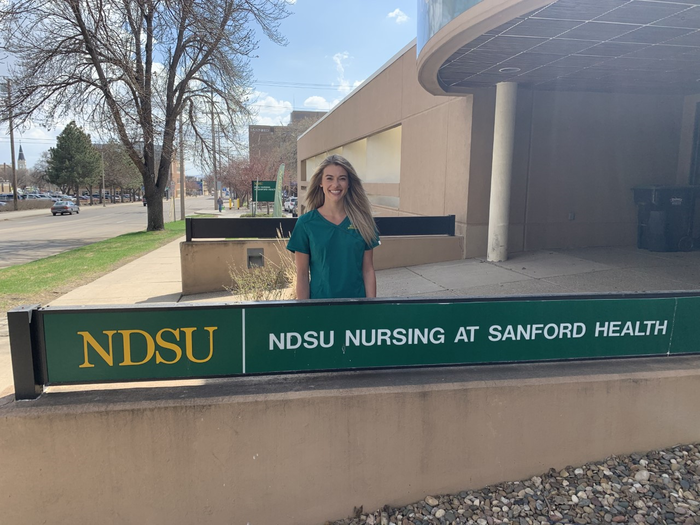 “After my grandma was diagnosed with stage IV pancreatic cancer, I knew that I wanted to be a nurse so that I could help patients and their families get through challenging times in their lives,” said Beck. “I chose nursing because I am inspired by caring for others and want to make an impact on my patients.”

The availability locally of the NDSU nursing program was a good fit for Beck. “I specifically wanted to stay in Bismarck so that I could save money living at home and I enjoy the Bismarck community,” she said, noting the program’s students maintain high rates of passing the NCLEX, a national exam that tests the competency of nursing graduates.

Beck said nursing school has taught her the value of hard work, determination, teamwork, and preparation. Camaraderie with her classmates also played a role in her success.

She also appreciated that her instructors believed in her. “They have taught me not only about the pathophysiology of disease processes but have also shown me how to be a caring and selfless nurse,” said Beck.

Beck was named the Outstanding 2020 Graduate in her class. Upon graduation, Beck will be working in neonatal intensive care in Bismarck. She said an internship in the specialty prompted her to pursue it.

“I have had the opportunity already to care for the smallest of babies and it is such a beautiful thing to not only care for the babies, but also be there for the parents and educate them and be there to support them,” said Beck.

A global path led graduate Kalisa Ndikubwimana to Bismarck. He began a career in healthcare as a pharmacy technician and later decided to attend nursing school. 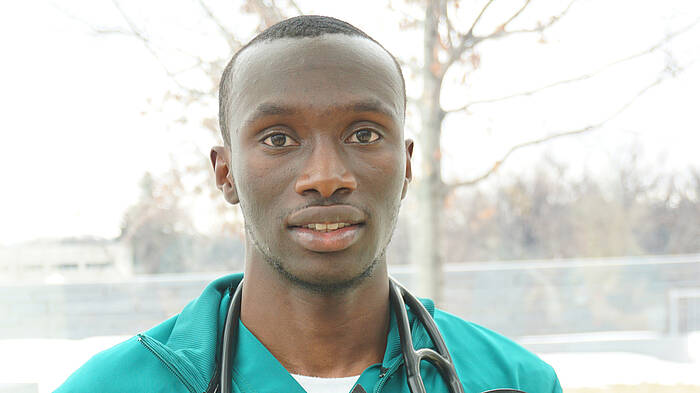 “I was working at Roger Maris Cancer Center at Sanford Health in Fargo,” said Ndikubwimana. “I had an opportunity to speak to some of the patients at RMCC. One of the patients gave me a glimpse of how a nurse at RMCC has changed their life and I wanted to be part of someone’s journey like the nurse at RMCC.”

His journey began long before coming to Bismarck. “I spent 17 years in a refugee camp in Rwanda after war broke out in the Democratic Republic of Congo,” explains Ndikubwimana. “The civil war continued with extreme violence and human rights abuses. One thing that made the biggest difference in overcoming these hardships and in healing from past traumas has been the welcome received when I joined my new community.”

He says his Christian faith and close family have helped him in his journey. His family includes two brothers, three sisters and a nephew, all proud of what he has achieved and his commitment to helping others. “My older sister had to stop school to make sure we had a better life. This is another factor that motivates me to continue my education through college. I want very much to make my parents and my siblings proud of me,” he said.

According to Ndikubwimana, NDSU School of Nursing at Sanford Health was the right choice for his education. “The teachers get to know their students. They care about everyone’s success. We get one-to-one assistance with the teachers,” he said. “You get to know every student in your cohort and outside your cohort. The classes are small enough to allow students to get their questions answered.”

Ndikubwimana also appreciated the preferred clinical site rotations as a student, with Sanford Health located adjacent to the NDSU nursing school in Bismarck. “We get to do our rotations here in town, which is very convenient for our education.”

Ndikubwimana will be working in pediatrics at a Bismarck hospital. He also plans to eventually pursue graduate education to achieve a doctor of nursing practice/family nurse practitioner degree, also offered through NDSU School of Nursing at Sanford Health in Bismarck.