November 7, 2016 – Fargo, North Dakota – When Fred Paavola and Sylvan Melroe began their academic studies at North Dakota State University, neither had a crystal ball to predict the decades ahead. However, both men say their involvement in the Reserve Officers’ Training Corps (ROTC) at NDSU set the stage for achievements throughout their careers. 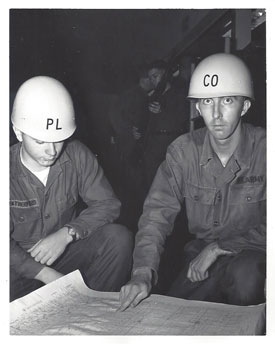 Paavola graduated in 1970 from the NDSU School of Pharmacy. Reserve Officer Training Corps combined with pharmacy set him on another path. “With ROTC, you learn how to be a leader,” Paavola said.

When he retired from the military, Paavola found still another avenue to serve. He spent the next thirteen years as a National Disaster Medical System team commander in Tucson, Arizona, heading a deployable team of 50 health care professionals who set up mobile hospitals where they are needed during disasters.

Plain-spoken and humble with a sense of humor, Paavola still carries himself with the straight posture of military training.

“I went into the ROTC at NDSU to get a commission at graduation,” said Paavola.

As for what ROTC at NDSU taught him, Paavola sums it up succinctly. “Leadership and decision-making skills.”

He said his training in pharmacy at NDSU also had an impact. “There’s no question about my professional skills. That brings the foundation of how you make decisions, how you can evaluate things, how you work with patients,” said Paavola.

In 2016, Paavola and his wife Linda (BS, psychology, ’73) received the Heritage Award for Alumni Service for outstanding support of time and talent to NDSU. In addition, the Paavolas provided a key gift for the Fallen Bison Memorial on the NDSU campus. In 2002, Fred Paavola received an honorary doctorate from NDSU and in 2001, received the Alumni Achievement Award, presented to an individual who has achieved distinction in their professional field.

Paavola also served on the NDSU Alumni Association Board of Directors and the National Pharmacy Advisory Board for the NDSU School of Pharmacy.

From serving his country to global business 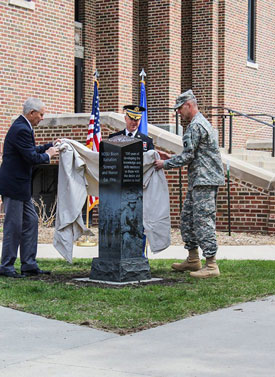 Sylvan Melroe graduated from NDSU in 1957 with a bachelor’s of science degree in agricultural education. In 1958, Melroe began his military career, serving as a U.S. Army Artillery Officer, second lieutenant. He completed his service in 1960 as a first lieutenant.

While Melroe’s original plan was to be a pilot, a health issue from a lifetime of distance running caused him to change plans. In 1955, an Army leader asked him to join the Army. “Being in ROTC and serving as an officer seemed to be the best way to serve my country,” said Melroe.

His ROTC training served him well in business. “It taught me how to be a leader by giving commands and being in charge of the troops. It was the best thing I did in college,” recalls Melroe.

After leaving the Army in 1960, he started working at the Melroe Company in Gwinner, North Dakota. “I spent the summer delivering and installing windrow pickups on combines.”

Later that year, Melroe was named the first advertising manager of the company.  At the same time, a small, skid-steer loader was being developed.

An advertising agency representative from Minneapolis named Lynn Bickett and Sylvan Melroe came up with the now legendary brand name. “Lynn Bickett and I named it the Bobcat® and decided to paint it white. The white color is the identifying mark of that machine,” said Melroe.

In 1962, Melroe was named western regional manager, and trained sales managers and set up dealerships for the Bobcat® skid-steer loader. In 1970, he became vice president of marketing for Clark Equipment, which bought the Melroe Company in 1969. His work in business took Melroe to all 50 states and more than 40 countries. Bobcat® is now part of global equipment giant, Doosan Corporation.

Melroe would join Steiger Tractor Company in Fargo, North Dakota in the 1970s, eventually becoming vice president of marketing from 1976 to 1980. The company generated more than $124 million in sales at that time.

Change came in 1984 when Melroe used his sales and business acumen to serve one year as the Director of the Economic Development Commission for the State of North Dakota. Since that time, he’s served as a business consultant, helping others form companies and launch products.

A supporter of NDSU, Melroe served on the Alumni Association Board of Directors for 15 years, with two as president. Over the years, he’s also served on advisory boards for the College of Engineering, College of Business, College of Education and the board of Team Makers for NDSU Athletics. In 2013, Melroe received the Heritage Award for Alumni Service for outstanding support of time and talent to NDSU.

Both Melroe and Paavola took the skills learned in ROTC and the military, applying them to a lifetime of service.

Having two veterans from NDSU named to the national ROTC Hall of Fame speaks volumes about the ROTC’s history at NDSU, according to Lieutenant Colonel Ted M. Preister. He is professor of military science and leader of The Bison Batallion, NDSU Army ROTC.

“Rear Admiral Paavola achieved one of the highest profile positions as Assistant Surgeon General,” said Preister, “as well as having one of the broadest national impacts.”

Preister also noted the business achievements of Melroe. “The name recognition of Bobcat®, combined with his impeccable character and continued service to NDSU and other communities, demonstrates the best of what we hope graduates of ROTC will embody.” 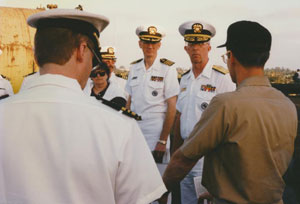 Only two nominations for the ROTC Hall of Fame were authorized from any program. “It is a testament to the character of the institution that both nominees from the university were selected,” said Preister.

The North Dakota Legislature in 1890 directed NDSU, then known as the North Dakota Agricultural College, to include military instruction in the curriculum. In 1916, Congress passed a bill formalizing the ROTC program and that same year, the program at NDSU was officially recognized. The first regular instruction officer was delayed in getting to NDSU by involvement in World War I until 1920.

At ROTC Hall of Fame ceremonies held in Ft. Knox in June 2016, keynote speaker Gen. (retired) Carter Ham, former commander of the U.S. Africa Command, noted achievements of those who serve: "Whether they serve for a few years or for many, ROTC graduates make a difference across our Army and across our nation.”

On Veterans Day, we recognize and honor all those who serve our country in every branch of military service.