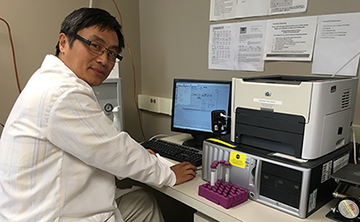 Principal researcher Steven Qian, associate professor of pharmaceutical sciences in the School of Pharmacy, is receiving the competitive grant award from the National Cancer Institute and the Institutes of General Medical Sciences of the National Institutes of Health.

Colorectal cancer is the second leading cause of cancer-related deaths in the U.S. and the third most common cancer in men and in women, according to the Centers for Disease Control and Prevention. The rate of incidence of colon cancer in North Dakota also appears to be significant according to a CDC map comparing state statistics.

Some studies have shown that diets such as those high in Omega 6 fatty acids play a role in cancer development. That may be due a membrane-bound enzyme called COX (cyclooxygenase) that can catalyze many of the fatty acids in the body to form harmful products that promote cancer.

“Cancer patients often have high COX-2 levels from cancer cells and tumors and current cancer treatment focuses on limiting these high levels,” said Qian. “This classic approach to develop COX-2 inhibitors as drugs, however, could limit the effectiveness of chemotherapy drugs and also result in safety concerns. For example, the COX-2 inhibitors used to control these levels in cancer treatment can severely injure the gastrointestinal tract and increase the risk of cardiovascular disease.”

In Dr. Qian’s lab, the research strategy focuses on the potential therapeutic approach to explore the higher levels of COX-2 found in cancer cells, rather than inhibiting them. This is a paradigm shift about COX-biology in cancer treatment. Dr. Qian and his team will research the high level of COX in cancer and the more abundant Omega 6 fatty acids in human diets to determine how they can be used to control cancer growth and potentially make colon cancer therapies more effective.

Molecular mechanisms by which Omega 6 fatty acids can influence human health are still unclear, but Dr. Qian’s lab has demonstrated that Omega 6 (Dihomo-γ-linolenic acid known as DGLA) may have beneficial effects similar to Omega 3 fatty acids, whose manipulation has been commonly used for cancer treatment.

The research team in Dr. Qian’s lab will further investigate the underlying mechanisms to develop a workable approach to be used as a new colon cancer therapy or as a complement to current chemotherapies.

The competitive grant award to the NDSU research team was made under the Institutional Development Award (IDeA) program, which broadens the geographic distribution of National Institutes of Health funding for biomedical research. The program also serves unique populations—such as rural and medically underserved communities.