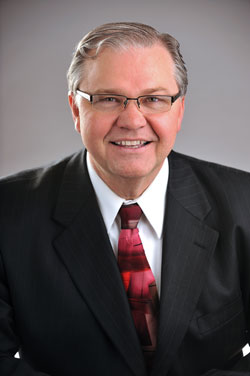 November 1, 2016 – Fargo, North Dakota – Robert I. “Bob” Biberdorf has been selected as the NDSU School of Pharmacy Distinguished Alumnus for 2016. Sponsored by each of the colleges at the university, the NDSU Distinguished Alumni Award Program recognizes accomplishments of outstanding alumni and educates students by introducing them to successful alumni in their respective fields of study.

As the senior executive director of pharmacy for Sanford Health, Biberdorf oversees the pharmacy enterprise for an extensive health system serving thousands of patients. He is a graduate of the NDSU School of Pharmacy in the College of Health Professions, receiving his bachelor’s degree in 1976 and master’s of science in pharmacy in 1978.

As a leader in the pharmacy profession, Biberdorf served to educate students and advance the practice of pharmacy through innovation in teaching, research and practice. At NDSU, he is professor emeritus and previously was an assistant professor and lecturer in pharmacy. He serves as a role model to students, and contributes to the School of Pharmacy’s commitment to preparing students to become competent, caring, ethical professionals and citizens committed to lifelong learning.

Biberdorf also has served as a long-term care pharmacy consultant, as assistant editor of Drugdex Drug Information System, I.V. clinical supervisor and drug information center director within the Veteran’s Administration medical system, and as an assistant professor of clinical pharmacy at the University of Wyoming.

His extensive knowledge of the pharmacy profession has been shared in many settings, including more than 120 invited presentations on pharmacy and therapeutics issues.

For more information about College of Health Professions Distinguished Alumni and other alumni awards, visit https://www.ndsu.edu/healthprofessions/awards/