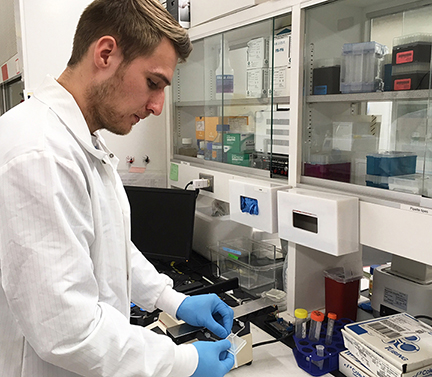 April 13, 2018 – Fargo, North Dakota – Nobody does it better than nature, but North Dakota State University researchers are getting a step closer.

While Spider-Man shoots silk from his wrists, real spiders and silkworms have a better way and researchers in the pharmaceutical sciences lab of Dr. Amanda Brooks at NDSU have developed a method to improve the production of synthetic silk fibers.

Results of the research titled “Using hydrodynamic focusing to predictably alter the diameter of synthetic silk fibers” is published in PLOS ONE.

The goal of the research is to ultimately develop synthetic silk fibers to use in a variety of commercial, military and biomedical applications such as infection responsive drug-releasing bubbles, drug-releasing silk fibers and silk protein to bind heparin and prevent infection.

Spiders use a unique interplay of chemistry, biology and mechanical shear when they produce silk through glands located at the tip of their abdomen. Their complex natural spinning systems result in strong, consistent strands. Spider silk by weight is estimated to be three times tougher than Kevlar® and five times stronger than steel.

The search for a way to mimic spider silk has led to different systems such as electrospinning, wet-spinning, dry-spinning and microfluidic spinning. Though each method works, none has produced the strength and elasticity of natural silk fibers.

NDSU researchers created a patent pending 3-D printed silk spinning device that mimics the natural gland structures of the spider and the silkworm.

“We also control the fluid flow through the device, which allows us to even more closely mimic natural silk spinning to produce fibers with smaller diameters and higher strength,” said Hoffmann. “The significance of this research is two-fold and includes applying fluid focusing in silk spinning and producing predictable fiber outputs. The combination of predictability and tailorability allows higher quality engineered silks.”

“This research sets the stage for continued advancement of biomimetic spinning that can provide insight into manufacturing high performance materials for different applications,” said Hoffmann.

Though the research team achieved decreased diameters and higher quality, the strength and elasticity of the synthetic fibers is still not a match for their natural counterpart.

About PLOS ONE
The world’s first multidisciplinary Open Access journal, PLOS ONE accepts scientifically rigorous research, regardless of novelty.  PLOS ONE’s broad scope provides a platform to publish primary research including interdisciplinary and replication studies as well as negative results. The journal’s publication criteria are based on high ethical standards and the rigor of the methodology and conclusions reported.