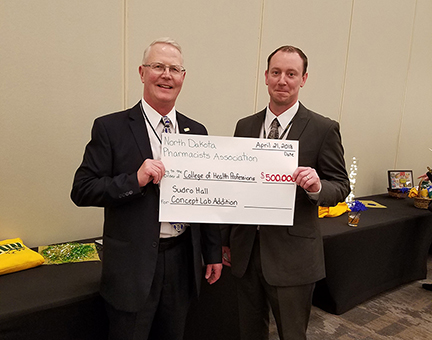 April 25, 2018 – Fargo, North Dakota – The North Dakota Pharmacists Association at its annual convention April 20-22 in Fargo announced a $500,000 donation to the NDSU School of Pharmacy for a Concept Pharmacy in the new, privately funded Sudro Hall Addition being constructed on the NDSU campus.

Mike Schwab, executive vice president of the North Dakota Pharmacists Association, based in Bismarck, North Dakota, presented a ceremonial check to Dr. Charles D. Peterson, dean of the School of Pharmacy and College of Health Professions at NDSU.

“Pharmacy professionals support efforts to educate the next generation of pharmacists with state-of-the-art technology and methods,” said Schwab. “This philanthropy represents our investment in the future of the profession. It is humbling to see so many of our Association members from across the state rally together to make this available for pharmacy students.”

The new Concept Pharmacy in the 74,000 square foot, privately funded addition to Sudro Hall will provide pharmacy students with hands-on experience as they learn about medication, patient care and applying their pharmacy education as future professionals in the field. The new addition under construction is expected to open in 2020.

“An estimated 90 percent of practicing pharmacists in North Dakota are NDSU graduates,” said Charles D. Peterson, dean of the School of Pharmacy. “We greatly appreciate the support of pharmacy alumni and other supporters who invest in our students to advance the field of pharmacy.”

The NDSU School of Pharmacy received national attention when it began its first Concept Pharmacy in 2002, with national publications deeming it a unique and innovative approach in pharmacy education.

“This donation will make an enhanced concept pharmacy possible with state-of-the-art technology to help us continue as a leader in pharmacy education,” said Peterson.

Located in the NDSU College of Health Professions, the NDSU School of Pharmacy supports, educates and trains undergraduate, professional and graduate students to become highly skilled and caring health care professionals and creates new knowledge through excellence in the practice of pharmacy and pharmaceutical research. The school is a member of the American Association of Colleges of Pharmacy, and is accredited by the Accreditation Council for Pharmacy Education (ACPE).