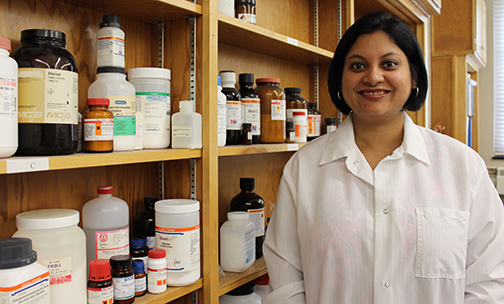 One mother vividly remembers her then three-and-a-half-year-old son's pleas when he received insulin injections several times each day. “He would beg and plead, ‘Don’t do it Momma!’” Linsey Davis recalls.

Injecting insulin is a daily part of life for many people managing their type 1 diabetes. Research by a pharmaceutical sciences faculty member at North Dakota State University focuses on providing patients with other options.

A study by a team that includes Amrita Banerjee, assistant professor of pharmaceutical sciences at NDSU, shows promise in administering insulin in pill form. Banerjee is listed as first author in the study published in the Proceedings of the National Academy of Sciences. She completed the research while working as a postdoctoral fellow with Samir Mitragotri, professor of bioengineering and biologically inspired engineering at the Harvard John A. Paulson School of Engineering and Applied Sciences.

People with diabetes must continually keep their blood sugar in check to manage diabetes. This is usually done through multiple daily injections of insulin or through a pump that is placed under the skin.

Dr. Banerjee, as part of a research team, focused on delivery of insulin in pill form. Researchers faced a multi-level digestive obstacle course for such a pill to work inside the human body. The stomach provides the first barrier to oral administration of insulin. Stomach acids easily break down proteins and could normally obliterate an insulin pill. To leap that hurdle, Banerjee and the research team placed insulin in an ionic liquid and put it in a capsule. An enteric coating on the capsule made it acid resistant.

Powdered insulin was inserted in an ionic fluid of choline and geranic acid inside the capsule. Choline is a macronutrient found in foods such as eggs and liver. Geranic acid is a flavoring agent naturally in cardamom and lemongrass.

"The enterically coated capsule will not break down in the stomach," said Banerjee. "Once the capsule enters the intestine, where the environment is more alkaline, the enteric coating dissolves, and the capsule releases the ionic liquid with the insulin in it," she said.

Researchers faced another hurdle. Enzymes in the intestine break down proteins. In this case, however, the formulation of the ionic liquid prevents breakdown of the ionic insulin. "Enzymes need a particular ionic environment to work with, but when you disturb that, they don't work that well," said Banerjee.

In its trek through the body, an oral insulin pill faces a third hurdle. The mucus layer of the intestine functions as a gatekeeper. It's designed to trap germs and tell large molecules like insulin, "You shall not pass!"

But the ionic liquid formulation used in Banerjee's research thins the mucus layer. "When it becomes thinner," explains Banerjee, "the insulin can more easily cross through the mucosal layer."

One final digestive hurdle remained. The intestinal cells are tightly packed, with nearly impenetrable junctions---again designed to keep large molecules like insulin from passing through them.

"In our study, we have shown that the ionic liquid opens up those tight junctions temporarily so that large molecules can slip through," said Banerjee.

The study's principal investigator, Samir Mitragotri at Harvard, summed it up this way, as quoted in a Harvard news release. "Our approach is like a Swiss Army knife, where one pill has tools for addressing each of the obstacles that are encountered."

Although the research holds promise, there is more work to be done. The study used rat models. Banerjee said the next steps would include large animal studies and eventually clinical trials. Initial research has shown the ionic fluid carrying insulin remains stable at room temperature for two months and for at least four months when refrigerated. She thinks the process and its components could be scalable for production.

Harvard's Office of Technology Development is actively pursuing commercialization opportunities for this technology.

"This is a long-term hope that this technology gets commercialized and reaches the diabetic patients who need it," said Banerjee.

"We are working on the formulation," said Banerjee. "We are loading nanoparticles with certain genes that make people more sensitive to insulin to help address insulin resistance."

Banerjee is hopeful that research in the pipeline can eventually help patients.

As for the mother whose young son is now six years into a lifetime of managing diabetes, Linsey Davis too remains hopeful that the research underway will help him and others manage their chronic condition to maintain a healthy life.

About NDSU School of Pharmacy
In the NDSU College of Health Professions, the School of Pharmacy educates undergraduate, professional and graduate students and creates new knowledge through excellence in the practice of pharmacy and pharmaceutical research. Research areas include diabetes, Alzheimer’s disease, pancreatic, colorectal, prostate and breast cancer, obesity, targeted prescription drug delivery methods, topical antibiotics, hypertension, stroke and opioid misuse prevention. The school is a member of the American Association of Colleges of Pharmacy, and is accredited by the Accreditation Council for Pharmacy Education (ACPE).