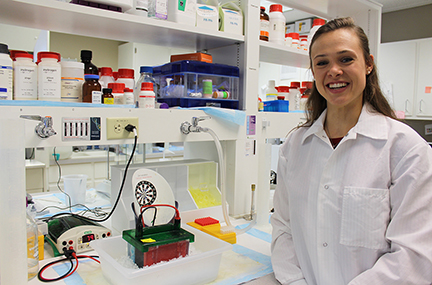 Pick an “e” word. Energized, educated, enthusiastic, eloquent. These all describe how engaged NDSU undergraduate student Christy Anderson becomes when doing her research in the pharmaceutical sciences lab of Dr. Sathish Venkatachalem in the College of Health Professions at NDSU.

Anderson started working in the lab during the fall of 2017 at the suggestion of her advisor, Dr. Katie Reindl in biological sciences in the College of Science and Mathematics. As a pre-med major soon entering her senior year, Anderson had no prior research experience. “If I miss out on doing research now, I don’t know if I’ll ever get to do it,” she thought.

Though Reindl had no openings in her lab, she knew someone who did.

Dr. Sathish Venkatachalem in pharmaceutical sciences studies the role of estrogen in asthma. The incidence and severity of asthma is higher in both pre-menopausal women and in aging men, suggesting a role for estrogen in modulating this disease. It’s unclear whether and how estrogens impact the airway. Venkatachalem also studies chronic obstructive pulmonary disease and pulmonary hypertension.

“It was a really smooth process to join his lab,” says Anderson. “It was probably within a week that I joined and started learning things. You kind of start from square one.”

Venkatachalem is a member of the American Physiological Society. He saw opportunity when he interviewed Anderson for a spot in his lab. He encouraged her to apply for an APS undergraduate summer research grant for students who have done research for nine months or less.

“These fellowships provide a rich and unique experience, allowing undergraduates in the sciences to have a summer immersed in research and face-to-face interactions with a professional researcher,” said Marsha Lakes Matyas, PhD, director of APS education programs. “The time that students spend in the lab with their research hosts gives them a firsthand look at what it’s like to pursue a career in science and can have a profound impact in encouraging them to remain in the sciences.”

Fellows participate in hands-on research and learn to develop a hypothesis, design and troubleshoot experiments, collect and analyze data, and write and present results.

Each fellow receives a $4,000 stipend for a 10-week research experience and $1,300 for travel to present their research at the APS annual meeting in Orlando in 2019, which is expected to attract 14,000 attendees. The host lab also receives funds for student laboratory supplies.

“I was a little timid at first,” says Anderson of her research experience. “Research isn’t a 'punch in punch out' sort of job.”

What the undergraduate research fellowship provides is the opportunity to work fulltime in the lab in the summer, rather than the 10-hours a week Anderson worked previously. “There are quite a few experiments in the lab that you can’t complete in two or three hours. You need all day or multiple days,” says Anderson.

Her research involves mitochondria, known as the powerhouse in each of the body’s cells.

“With asthma, there’s an increase in contraction of the bronchi,” says Anderson about the part of the airway that conducts air into the lungs. “In a healthy person, mitochondria buffer calcium in the cells. And calcium plays a role in contraction,” she explains, pointing out that she’s investigating how estrogen might affect contraction as well.

“I expose my cells to a compound and they light up or fluoresce and I take pictures of it to see how those mitochondria are changing when there’s inflammation in cells,” says Anderson. 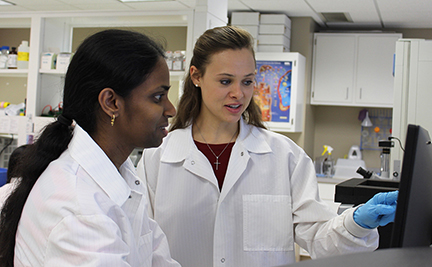 “She started giving me some of her cells, which is a big deal because they take a long time to grow,” says Anderson. “She’s trained me. She’s taught me. She’s showed me how to use live cell imaging. She is super good at what she does.”

Bhallamudi says she benefits from being Anderson’s mentor, while conducting her own asthma research.

“Being a mentor is an essential part of a PhD program. It makes us learn more and become a teacher. It trains us to be a better researcher,” says Bhallamudi. “Christy comes forward and asks the most difficult questions. It helped me to explore more in science and made me progress in my science.”

Anderson says her experience working in the lab will help in her future medical career. “Before, I wouldn’t have considered doing research,” she admits. “At this point, I would consider being an M.D. but also doing some research.

“There have been moments when we’ve realized what we’ve been doing wrong, what we needed to tweak in an experiment. And that gets me really excited,” says Anderson, sharply drawing in her breath. “We know what we did wrong. Now we’re going to change this one variable in the experiment and see if we get results this time.

“I really like the collaboration piece and the problem solving,” says Anderson. “I really enjoy working alongside people who are from a different culture than my own. I’ve asked them to start teaching me to learn Hindi,” she says of her lab colleagues. 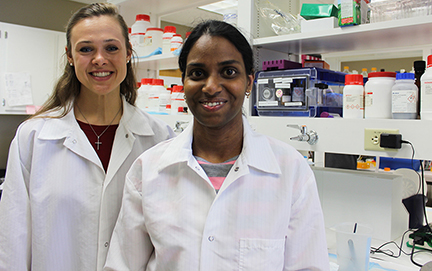 The APS summer undergraduate research fellowship opened other doors for Anderson, too. Undergraduates in the program are connected through a website where they discuss their research, as well as complete assignments. They will have the chance to meet at the national conference in Orlando in 2019 and can present their research findings.

Fellows in the program are selected based on academic merit, the quality of the proposed experience and the availability of appropriate faculty mentors.

NDSU Assistant Professor Sathish Venkatachalem in pharmaceutical sciences says there are benefits for labs that participate in the program as well. “Promoting undergraduate student research not only provides a boost to the student, but science as a whole. Working with dynamic, motivated students will always be mutually beneficial to our research team at NDSU.”

Anderson sees her undergraduate research experience as enhancing her future career. “I think it’s going to help me with problem solving,” she says. “I’m hoping with a career as a physician, this would be something I would apply with diagnosing patients and figuring out how I can best help patients.”

She will continue to work in Dr. Venkatachalem’s lab during the fall semester, after she marries a fellow NDSU student in engineering. Upon graduation, she hopes to receive a medical school acceptance letter and begin her journey to become a physician.

Anderson says her time at NDSU has gone by quickly. “I enjoyed the fact that it wasn’t so small but it was also not so big that I felt that I was going to get lost in the crowd.” Her father, Robert, is a graduate of the NDSU School of Pharmacy and owns a community pharmacy in Northfield, Minnesota.

“It’s been an incredible education,” says Christy, as she enters her senior year. “I felt that my professors very much prepared me to be a competitive medical school applicant. I really felt that I could get a solid science education at NDSU.”

About the American Physiological Society Education Department
APS supports a variety of educational activities, including programs and fellowships to encourage the development of young scientists at the undergraduate and graduate levels, with a particular focus on women and underrepresented minorities. www.the-aps.org/ugsrf

About the NDSU School of Pharmacy
In the NDSU College of Health Professions, the School of Pharmacy educates undergraduate, professional and graduate students and creates new knowledge through excellence in the practice of pharmacy and pharmaceutical research. Research areas include asthma, diabetes, Alzheimer’s disease, pancreatic, colorectal, prostate and breast cancer, obesity, targeted prescription drug delivery methods, topical antibiotics, hypertension, stroke and opioid misuse prevention. The school is a member of the American Association of Colleges of Pharmacy, and is accredited by the Accreditation Council for Pharmacy Education (ACPE).