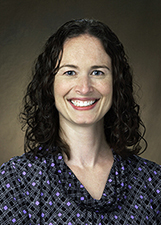 Natasha Petry, PharmD, BCACP and assistant professor of pharmacy practice in the NDSU School of Pharmacy, was named Faculty Preceptor of the Year.

Pharmacy students on clinical rotations nominate and choose the award recipients for Preceptor of the Year.

“It was a new area in genomics which really tested my knowledge,” said one student about their experience with Dr. Petry as Faculty Preceptor of the Year.

“She gave me projects that helped me research and look into it myself and present the ideas to fellow colleagues. She made me feel more confident in my ability to become a pharmacist," said the student.

She serves as assistant professor of practice in the NDSU School of Pharmacy, as well serving at the clinical site of Sanford Imagenetics. She received her bachelor’s of science and doctor of pharmacy degrees from NDSU.

As Adjunct Preceptor of the Year, Cmdr. Tyler Lannoye is the Chief Pharmacist for the Quentin N. Burdick Memorial Hospital Pharmacy in 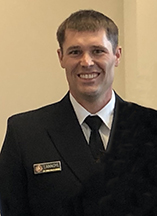 Belcourt, North Dakota. He is a Commissioned Corps Commander with the United States Public Health Service.

Exceptional is a word that students on rotations use when describing Cmdr. Lannoye, describing him as an exceptional mentor, role model, clinical pharmacist and leader.

“He set high standards for me to achieve throughout the rotation that enabled me to grow professionally,” said one student, noting that he was always available to answer questions and provide insight.

“He is very interested in obtaining student insight on not only clinical questions, but questions related to improving his site’s student program  and advancing the profession of pharmacy. He extends the same respect that he gives his pharmacists to the students that he has on rotation,” said a student.

“All faculty and adjunct preceptors play a vital role in preparing the next generation of pharmacists,” said Charles D. Peterson, dean of the School of Pharmacy and College of Health Professions at NDSU. “The experiences that preceptors provide students are integral to prepare them to become members of the healthcare team.”

For more information on how to become a pharmacy preceptor, visit www.ndsu.edu/pharmacy and click on Experiential Education.