Jarajapu named Researcher of the Month at NDSU

When he was first considering careers, Yagna Jarajapu, PhD, was interested in studying engineering. When it came time to choose a college, India’s Andhra University was the closest institution to his home. However, as only a handful of students were accepted into his favorite field of engineering at Andhra University, he decided to study pharmaceutical science instead. This decision proved to be a wise one as Yagna soon discovered he had an interest and passion for pharmacology.

Jarajapu was selected as September 2020 Researcher of the Month by the NDSU Office of Research and Creative Actiivity.

He is currently an associate professor of pharmaceutical sciences at NDSU. His research interests of vascular physiology and pharmacology have led to his current work investigating the use of adult stem cells for diabetic patients to repair the damage done by the disease to their vascular systems. Jarajapu shares the alarming rates of diabetes today and the projections for the next decade.

“According to the CDC, 34 million Americans today are diagnosed with the disease but 88 million are considered pre-diabetic. By 2030, those numbers are likely to double or even triple depending on how we act now.”

Among certain groups the rates are even higher. “We are seeing disproportionate levels of diabetes in African Americans and Hispanics. Among Native Americans alone, up to 60% of the population have type 2 diabetes. Much of this is due to disparities in access to healthcare along with genetic factors and we are facing a true healthcare crisis in these populations,” he said.

While diabetes is not difficult to treat when detected early, the long term effects of the disease are what Jarajapu is targeting with his research. Over time, complications of the vascular system in a person with diabetes can lead to catastrophic conditions including heart attack, stroke, chronic kidney disease or amputations. He points out that the economics of controlling the disease that could soon impact 1 in 4 Americans are best in the early stages as the latter stages of the disease require more extensive and expensive care. 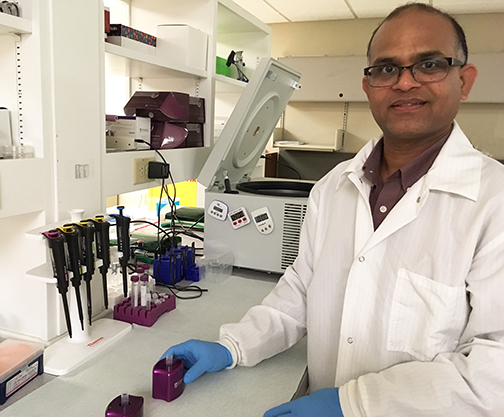 His research aims to help an individual’s body counter the long term effects of diabetes. While stem cell treatments have shown great promise in the treatment of cardiovascular diseases, the therapy’s effectiveness can be hampered by diabetes itself, therefore cell-based therapies are currently not feasible for diabetic vascular complications.

Jarajapu is offsetting this issue by treating cells with certain peptides at a molecular level. He has shown that when injected in the body of a mouse, these modified cells will begin repairing the vascular damage and causing the patient’s dysfunctional cells to begin functioning again.

Apart from science, he notes that there is an educational component that he stresses with his students. “I enjoy teaching in addition to research because we need more and more educators about the diseases our patients are suffering from.”

One of his mentors, Mohan Raizada, PhD, from the University of Florida, is a long-time researcher in the pharmacology of angiotensin peptides. Jarajapu credits Mohan with introducing him to the concept and inspiring him to research the peptides for protective effects in adult stem cells.

Before that, he was inspired to study how the vessels functioned in diabetes by his graduate research advisor, Chris Hillier, PhD. He relates the story about how Hillier required him to go to emergency rooms and surgical theaters and wait outside during amputation procedures.

“After the procedure was finished, the nurse would give me some tissue which I would take back to my small lab and dissect under microscope to isolate tiny blood vessels known as small arterioles of caliber 100-200 microns. Not many students were willing to wait for specimens in this manner, but I appreciate that my advisor required me to do this and the expertise I gained by working on this project.”

He states that one important aspect he’s learned in his career is that project management is critically important. “If you like your research, you will figure out how to do it. But you have to learn how to be a good project manager. For example, in my research, the aging process in the mice is accelerated, as in humans, once they have developed diabetes. They will soon die. You need to manage the animals and schedule effectively or you can’t complete your research.”

Collaboration has also been important to Jarajapu’s research. He points out that collaborations can be done with anyone both in his immediate team and outside of his discipline. He’s worked with researchers across campus in both exercise physiology and polymers and coatings.

“There are so many ways to collaborate. Sharing ideas is collaboration as much as sharing experimental models and I like to do both.” The clinical component of his research is critical for defining the translational potential of the findings, and is currently being accomplished in collaboration with Dr. Charles Garcia, MD, an ophthalmologist based in Houston, Texas.

Jarajapu tells young researchers to always keep an open mind and look for alternative ways and means to answer scientific questions. Learning from failures is the key for success. He believes that once you learn the right tools and mindset, they can be applied to any field of science. For being both an educator and a researcher, Yagna Jarajapu was recognized as the September 2020 Researcher of the Month by the NDSU Office of Research and Creative Activities.