Two NDSU students were the recipients of the first ever David R. Clouston Law Travel Scholarship in the 2020 spring semester. Emerson Solemsaas (left) and Taylor Schmidt (right) traveled to Dallas, TX for a three-day trip where NDSU alum and practicing attorney David Clouston lead the students through an intensive introduction to the legal community. They are pictured here with the presiding judge of the Dallas Court of Appeals. 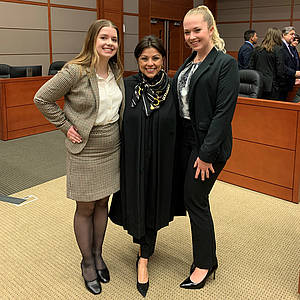 This opportunity is endowed by David Clouston, who is graduate of NDSU’s political science program. After earning his law degree from Baylor University, Mr. Clouston began practicing law in Dallas, Texas. He has represented clients in many different venues. In addition to his legal work, he serves as an Adjunct Professor in the Southern Methodist University Dedman School of Law Trial Advocacy Program and coaches the SMU Dedman School of Law Mock Trial team. He has published in The National Law Journal, Baylor Law Review, Executive Legal Advisor, and In-House Texas, and has also served as the securities podcaster for Texas Lawyer. Mr. Clouston was named one of the “Best Lawyers in Dallas 2016-2019” and received an award for Securities Litigation and Enforcement.