Although we have evidence to the contrary, many people still think of cardiovascular disease (CVD) as a disease primarily of men (1). This misconception stems from the fact that men tend to develop cardiovascular and other metabolic diseases about ten years earlier than women.  Furthermore, the risk of CVD for men rises rapidly during their 30s and 40s, and is considerably higher than women during that age period (2). This gender-specific disease progression warrants increased concern for CVD risk among men earlier in their life. 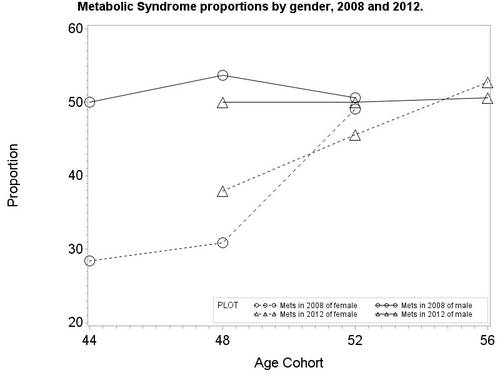 What is often neglected is that at the time the CVD risk for men is plateauing (though not declining) in their 40s, it is just beginning to increase for women, accelerating during the menopausal period and continuing beyond age 60. In fact, the CVD risk for men increases relatively little after age 50, while that of women continues to increase in a stepwise fashion (3).

I first observed this phenomenon in 2008 while conducting a longitudinal study on metabolic syndrome among healthy middle aged person in China (4).  The figure to the right shows the higher rate of metabolic syndrome among men in their 40s. But it also shows the rapid increase among women in the perimenopausal period, with a rate exceeding men by age 56. At the time when risks for men have plateaued, that of women is rising rapidly.