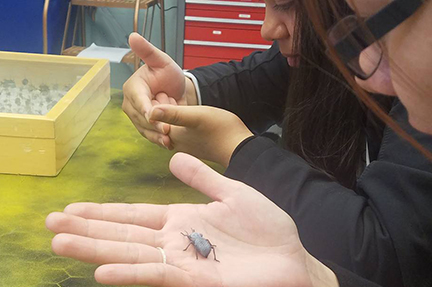 In her high school project, Vetter, of Linton, North Dakota, studied plants native to the state to see if compounds in them could treat Native Americans with diabetes. While participating in NDSU’s summer research program, she learned more about how to conduct research and participated in hands-on activities in on-campus labs in plant sciences, biology, genetics, microelectronics and more.

The program, in partnership with the North Dakota IDeA Network of Biomedical Research Excellence, gives students an opportunity to immerse themselves in research topics.

Charboneau initially thought she wanted to go into nursing. “I find joy in helping people. I also felt that research doesn’t get to deal with that.”  After her summer research experience in labs at NDSU, she now thinks that she may be able to combine both nursing and research.

“What stands out in this program is that it’s connecting to my culture,” said Charboneau, noting that early research into Native American populations didn’t always adhere to research protections or cultural considerations. She learned about informed consent and other standards during the two-week summer research program at NDSU.

Health disparities for American Indians in North Dakota are pronounced, with the average age at death being 20 years younger than the white population. American Indians diagnosed with diabetes who are 18 and older have about twice the rate of diabetes compared to other populations in the state, according to Dr. Donald Warne, chair of the Department of Public Health in the College of Health Professions at NDSU.

Mya Vetter said the summer undergraduate research experience at NDSU would help in her future career. “I learned more about my culture and research.” She plans to attend college to become an emergency room nurse.

After their summer research experience, both Vetter and Charboneau said the most valuable thing they learned was the 10 essential services of public health.

“This program connects students with research methods and indigenous research methodologies, and shows them how they could play a role in solving research challenges,” said Warne. The program is supported by Grant FAR0024572 from the National Institutes of Health (NIH).