Dr. Kalpana Katti, NDSU Distinguished Professor of Civil and Environmental Engineering, discussed her research at a seminar at Northwestern University in Evanston, Illinois on January 31. 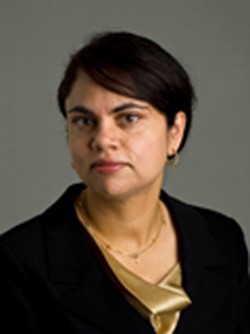 Her presentation, “Design of Engineering Testbeds for Prostate and Breast Cancer Metastasis,” details the NDSU Grand Challenge Initiative work on the artificial bone scaffolds that create cancer tumors in advanced stages of metastasis enabling testing of anticancer drugs, better understanding of late-stage cancer progression, discovery of new biomarkers of metastasis and the development of new interventional technologies. This is the first time an in vitro model of cancer metastasis to bone has been developed at an advanced stage of metastasis. Prostate and breast cancer metastasis to bone does not respond to treatments and often leads to patient death. After success with prostate cancer testbeds, the team has now also created a testbed for breast cancer metastasis.

Dr. Katti was also invited on November 11, 2017 to present an inauguration talk on “Engineering Test-Beds of Cancer Metastasis:  Using Materials Science and Mechanobiological Routes” at the inauguration of the Vienna Center for Engineering in Medicine at Technical University Vienna and Medical University of Vienna.

NDSU Vice President for Research and Creative Activity Dr. Kelly A. Rusch stated, “Dr. Katti’s research has significant potential for the greater public good. The team’s results have already advanced cancer therapy science and they continue to expand their scope with additional discoveries. Their work will truly improve lives.” 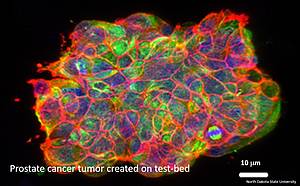 The Katti group’s research on cancer testbeds has been presented at prestigious meetings and conferences around the world, and their work has received accolades from leading researchers. The team has been approached by several prominent research groups at leading universities around the country for collaborative research using the cancer Test-Beds.

Dr. Katti leads the NDSU Center for Engineered Cancer Test-Beds (CECT). The center is part of the university’s Grand Challenge Initiative, which is designed to use NDSU’s role as North Dakota’s land-grant, research university to create innovative research that will improve the lives of people in the state and around the world with collaborative, interdisciplinary research. She has published 178 publications in Journals, conference proceedings, and book chapters. She is an NSF CAREER awardee, received the Peltier award for innovations in teaching in 2007 and the 52nd faculty lectureship award in 2011. Dr. Katti is also the recipient of the Roon award from Federation of Coatings Technologies in 1999 and Presidential Scholar award from Microscopy Society of America in 1996. She leads a group of NDSU’s top researchers to find a cure for prostate and breast cancer as part of the NDSU Grand Challenge Initiative, which was developed to solve complex and evolving global issues with collaborative, interdisciplinary research.