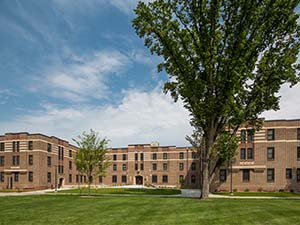 The construction of Churchill Hall (originally Men's Residence Hall) began in 1927 after its plans and funding were approved by the State Legislature. The hall was to house 192 male students and six resident instructors. It would contain approximately 100 rooms measuring 14 by 14 feet with hot and cold running water and two in-a-door beds. The entire structure would be a three-story structure with a basement for recreational purposes (The Spectrum May 27, 1927, p.1).

The modern accommodations were increased in 1939 when the Bachelor Kitchens were added to the basement. The use of the kitchens saved the male students, who used them, $17,000 on regular school expenses (The Spectrum August 25, 1939, p. 1).