2020 marked the 30th annual celebration of faculty and staff excellence.

The Agriculture and Extension Faculty and Staff Awards program recognizes exceptional performance by faculty and staff members in the NDSU College of Agriculture, Food Systems, and Natural Resources; the North Dakota Agricultural Experiment Station; and NDSU Extension. The awards program, established in 1991 to recognize outstanding teaching and research, expanded in 1992 to include professional and support staff, bringing the total number of awards to six. It was expanded again in 1996 to include two excellence in Extension awards and an additional staff award. The addition of an advising award in 2001 brought the total awards to its current 10. The two NDSU Extension awards were revamped in 2018. The Myron and Muriel Johnsrud Excellence in Extension/Outreach award was removed and the Extension Early Career Award was added. 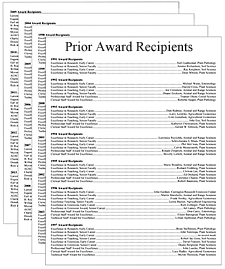