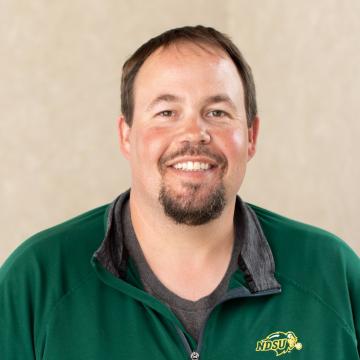 Chris grew up on his family farm in northeastern North Dakota near the town of Crystal. Helping out with the small grains, sugar beets, and potatoes operation gave Chris a love of agriculture and science. This carried over into college as he earned a B.S. and M.S. in natural resources management emphasizing soil science from North Dakota State University.

In 2008, Chris moved to Carrington to work for the NDSU Extension Service as a nutrient management specialist where he works with farmers’ and ranchers’ fertility programs and consults them on environmental issues. Four years later, Chris moved to Minot to serve as the soil health Extension specialist at the North Central Research Extension Center. During his time there, Chris helped farmers with salinity, sodicity, acidity, fertility, tillage, and other soil issues. While in Minot, Chris completed his Ph.D. in soil science from NDSU. His research evaluated several fertility treatments of soybeans grown in northcentral and northwestern North Dakota.

On April 1, 2020, Chris became director of the Dickinson Research Extension Center where he leads a team charged to focus on research and outreach for the southwest and greater North Dakota. Programs at the DREC include: livestock, range land, agronomy, and soil science. Chris’ research has focused on fertility and acidity management.