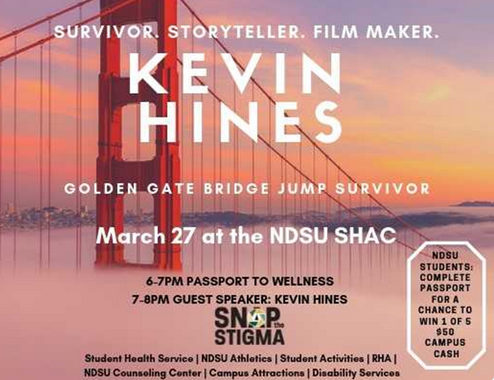 Noted author and public speaker Kevin Hines is set to give an NDSU presentation Wednesday, March 27, at 7 p.m. at the NDSU Sanford Health Athletic Complex, known as the SHAC.

Described as “a survivor, storyteller and film maker,” Hines survived a suicide attempt jumping from San Francisco’s Golden Gate Bridge. He now travels the world to spread his message of living with good mental health.

"The importance of awareness about mental health issues on our campus cannot be overstated,” said Amy Werremeyer, associate professor of pharmacy practice, who is active with the Snap the Stigma program in the College of Health Professions. “NDSU has already shown what a great welcoming and supportive community it is. Bringing Kevin Hines to campus allows us to continue to further that message and to continue to promote awareness that no one has to struggle alone."

Suicide is the 10th leading cause of death in the U.S., according to the American Foundation for Suicide Prevention.

Suicide can be prevented when people know the risk factors and warning signs. Reaching out to have an honest conversation with a person who may be thinking of suicide is important. Help is always available.

Hines’ story was featured in the 2006 film “The Bridge” by director and producer Eric Steel.

In 2013, Hines released his best-selling memoir, “Cracked Not Broken – Surviving and Thriving After A Suicide Attempt.” He also is producing a documentary titled “Suicide: The Ripple Effect” and a documentary series, “The Journey.”

Hines was presented the 2016 Clifford W. Beers Award by Mental Health America. He also has received a Lifetime Achievement Award from the National Council of Behavioral Health in partnership with Eli Lilly, was named an Achievement Winner by the U.S. Veterans Affairs and was acknowledged as a Voice Awards fellow and recipient by the Substance Abuse and Mental Health Services Administration.

He is a board member of the International Bipolar Foundation, Bridge Rail Foundation and Mental Health Association of San Francisco. He also serves on the Survivors Committee of the National Suicide Prevention Lifeline.

As a student-focused, land-grant, research university, we serve our citizens