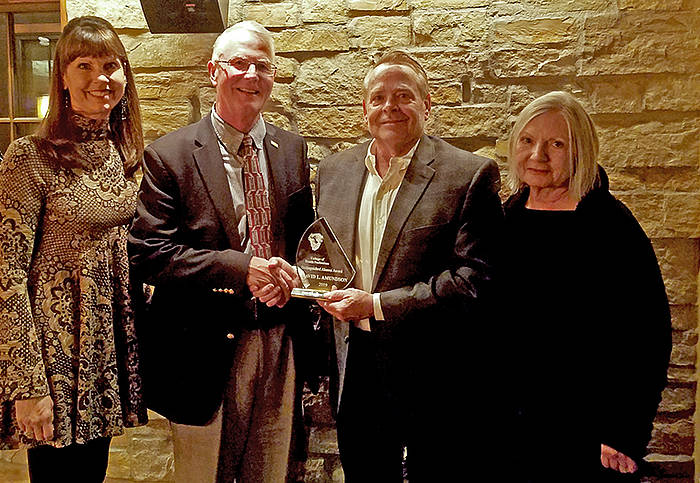 The NDSU School of Pharmacy and College of Health Professions named David Amundson its Distinguished Alumnus for 2019. The 1971 pharmacy graduate shared his personal philosophy with students at an event on October 18 on the NDSU campus.

Students attending learned about “Education, Opportunity and a Car” – because you need to know what to do, you need a chance to do it and you need to get there.”

Amundson’s career spans retail pharmacy, commercial strategies, operations and management. He began his career with SUPERx Drugs in Indiana, later working with Randall Drugs, Osco and CVS around the country.

An effective leader and team builder, Amundson credits his success to his midwestern roots, his education at NDSU, and his charm and sense of humor which he inherited from his mother.

As a Battle Lake, Minnesota and Fargo, North Dakota native who is a master storyteller, Amundson shared how he found the path to a successful career in pharmacy and offered encouragement to current students.

“What you say and how you say it has a huge impact on people,” said Amundson. He encouraged students to work hard and listen to people who cross their path. “Everyone has a story they want to share.”

Amundson began working at Johnson Drug in Fargo while in school. From a family of modest means, Amundson said he attended NDSU on the pay-as-you-go plan. He took out a loan each semester, worked during school, and paid it off the next semester. He stocked shelves and learned about running a business from the ground up.

“You just never know,” said Amundson. As a college student, he wanted to show the pharmacy owner his work ethic. He volunteered to clean and wax all the floors overnight in the drug store. They found him in the last aisle in the morning. The owner looked at him and said, “Thanks.” Amundson said, “That job that I did for the owner would pay huge dividends down the road.”

When Amundson applied for a job in his young career, the person who hired him showed him a letter that the owner of the Fargo pharmacy had written in his support. The pharmacy representative showed the letter to his district manager and his regional vice president. “Her comment was, ‘you better hire this guy.’ That was my reward. You just never know,” said Amundson.

Others in his career gave him opportunities to learn various parts of the pharmacy business including management. Each of those experiences laid the groundwork to his successful career in pharmacy. Amundson thought, “This is going to be a blast and it has been a blast,” he told students.

He learned even more when he took a job in an economically depressed area of Indianapolis, Indiana. Located in a rundown neighborhood, he had never seen anything like it with broken out windows, cars on blocks and neighborhood blight. “I was lucky enough to get that store,” said Amundson.

He learned from the store manager the integral role that a pharmacist and store can play in a community. “The people who came into the store, Bill would become their doctor, their pharmacist, help them financially, and most of all, he was their friend. These people knew that Bill was there for them.

“This is where I think I really fell in love with pharmacy,” explained Amundson. “I came to the store early, I wanted to stay late because there was nothing that I wanted to miss.”

Amundson recalled a customer who asked to put a $20 item on layaway and pay $1 a week. “’You did a pretty good job there,’” the pharmacist told Amundson after he waited on the customer. “But the takeaway is that not everybody is as lucky and as fortunate as we are.”

Amundson told NDSU pharmacy students that he learned an important lesson. “Humility is a good thing to have in your back pocket along with your cellphone,” he said.

His career is marked by taking initiative when he saw something that could be improved, working hard, and always trying something new.

It led to an opportunity to own and go into business for himself in the Chicago area.

“One of the keys to success in the retail pharmacy business and I think in almost anything in life is you have to build relationships,” Amundson told students. He took the time to develop partnerships in the community.

“In building relationships, Monday through Friday, I worked 9-9. Saturday, I worked 9-6. Sunday, I worked 11-4 for three years,” recalled Amundson of building his business. “I owed everyone money and failure was not an option,” said Amundson, whose wife Joy has been a significant part of his career journey.