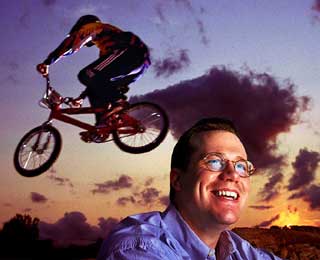 
Every time a person puzzles, Stu who? Dennis Smith gets his wish.

It's not exactly bells ringing and angels getting wings, but there's a nice story behind this tile at the North Dakota State University Alumni Center.

It's the story of how legendary BMX racer Stu Thomsen came to have his name etched in stone on the NDSU campus even though he never set foot here.

It all started back in the late '70s when Thomsen, nicknamed Stompin' Stu because he regularly stomped the competition, was taking the fledgling sport by storm. He was the American Bicycle Association's first No. 1 professional. While riding for Huffy during the mid-'80s he was also the highest paid, with his own signature frame sold in department stores around the country. Just about every BMX-racing kid in the nation wanted to be Stompin' Stu.

Smith, then a junior high schooler in White Bear Lake, Minn., was no exception. I was just an amateur. I was good, but nothing exceptional, Smith says. Stu Thomsen was the professional. He was known by everyone in the sport.

In the early '80s, Thomsen went into a terrible slump. He couldn't win, couldn't qualify for final races and finally dropped out of the national scene. The word was that he was out training and trying to fix whatever was wrong, recalls Smith. Then, the month preceding the Grand Nationals in 1983, Stu Thomsen came out of hiding and started to win. It was as if he was an entirely different person. He came up with the idea for the phrase Stu Who?' He had buttons and banners, and in BMX you put your name on your gear, so he had Stu Who?' across his back. He won the Grand Nationals that year in fact, he completely dominated and he continued to get back to the level that he once was.

Meanwhile, Smith raced for a couple of weeks each summer on the national ABA tour. He adopted the phrase Stu Who? to push himself, and friends and family used it to cheer him on. Smith won two national championships, one in 1983 and another in 1984, and was twice ranked in the world's top 10. He rode his final race in 1985 and that fall arrived at NDSU, bringing with him Stu Who?

Most of my closer friends were familiar with the sport, but no one I knew at NDSU had raced, Smith says. Stu Who?' was in my vocabulary, and everyone in my group always talked about it. It was a unique, unusual term, and it spread by word of mouth.

Soon, when a Bison athlete did something outstanding, exuberant calls of Stu Who? filled the stadium. When we'd be at a basketball game and Joe Regnier (BS '89, business administration, all-time Bison scoring and rebounding leader), who we knew, dunked the ball or did something good on defense, we would yell, Stu Who?' then slap high-fives. It was said when you did well on an exam, when you got a job that you wanted or something good happened on the job.

Smith earned his bachelor's degree in business administration in 1990. As he walked across the stage that warm day in May, Stu Who? echoed throughout the auditorium. He joined AT and T in Minneapolis and stayed with the company for 10 years. In 1996 he started night school at William Mitchell College of Law, St. Paul, Minn., and graduated in January. Calls of Stu Who? again filled the commencement hall.

When Smith learned of the Walk of Pride, he immediately knew what he wanted to do. Stu Who?' symbolized excellence. It is something that, when I hear it although it's not said much anymore in my life I think back to NDSU, he says. I thought it would be a good story to tell our children and it could be carried on.

The Alumni Association Board of Directors, concerned the phrase might be a derogatory comment, initially rejected the request. Smith settled on the first name.

When you look at the tile, what's the first thing you think? he asks.

The ABA calls Thomsen, who continues to race BMX and mountain bikes for Redline Bicycles, ... perhaps the biggest name our sport has ever had. He is the first person to be inducted into both the ABA BMX Hall of Fame and the U.S. Bicycling Hall of Fame.

As for Smith, he is a senior global account manager at SBC Communications, Minneapolis. He and his wife, Madison, live in Maple Grove, Minn.