Importance, cause, signs and symptoms, disease cycle and management strategies for clubroot of canola

The pathogen causing clubroot, Plasmodiophora brassicae, is a soil-borne organism in the taxonomic kingdom Protista. Compared with other pathogen groups (such as fungi, bacteria and viruses), Protista pathogens are relatively rare, and their biology and the management strategies to manage them are somewhat unique.

Symptoms of clubroot can include wilting, stunting, reduced seed production, a thin stand and premature plant death (Figures 1-3). However, above-ground symptoms do not always occur and are not diagnostic of the disease. Additionally, above-ground symptoms of clubroot resemble many other ailments, including moisture stress (flooding or drought) and infection with other diseases (blackleg, sclerotinia stem rot, etc.). 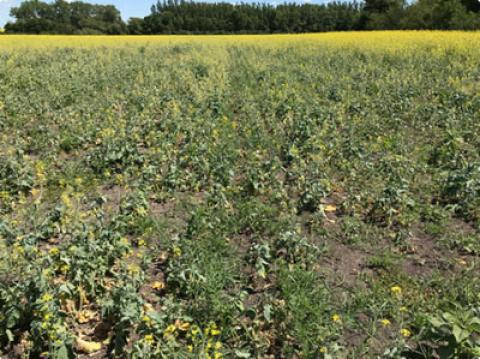 P. brassicae colonizes root systems, compromising the moisture and nutrient uptake of the plant. When scouting, whole root masses should be dug up and carefully examined, rather than pulled at the base of the stem. Infected roots will appear deformed with swollen areas of tissue called galls. Galls will be small as they begin to develop but may be up to 1 inch in diameter by the time of maturity. Infected roots may have just one or a few galls in discrete areas of the root tissue (resembling clubs) or numerous galls that impact nearly the entire root system (Figures 4 and 5). Galls commonly lose integrity as the season progresses, and by plant maturity are brittle and dusty when broken.

The pathogen survives as robust resting spores, which can remain viable for more than a decade in the soil. In the spring, resting spores germinate to produce motile zoospores that swim through water in the soil.

Zoospores encyst on root hairs of susceptible plants and form a cell that (under a microscope) resembles an amoeba, called a plasmodium. The plasmodium invades cells and divides to become more zoospores that re-infect additional root tissue or are released into the soil and can infect neighboring plant roots.

Once infection occurs in the cortical tissue (central cell layer), the pathogen produces secondary plasmodia that cause plant cells to divide and swell, resulting in gall formation on the roots. The plasmodia eventually divide into millions of resting spores that are released back into the soil when galls rapidly disintegrate and are decayed by soil microbes.

High soil moisture, acidic soil (low pH) and temperatures around 68 to 77 F favor infection and disease severity. Poorly drained areas or parts of fields commonly flooded are more prone to infection. Although infection (and yield loss) can occur in soils at any pH, those with pH above 7.2 may have less damage.

P. brassicae is most commonly spread during its resting spore stage through infested soil that is stuck on farm equipment or other vehicles that enter infested fields. However, strong wind gusts and flooding also have been identified as capable of transferring spores. Consequently, new clubroot infestations are commonly observed first in field entrances (from soil moved on equipment), in low-lying or flood-prone areas and/or along shelter belts.

Limiting movement of soil will help prevent the spread of the pathogen within a field known to have clubroot and also prevent introduction of the pathogen into new fields. Reducing soil disturbance and movement (such as by limiting tillage, limiting trips across the field, etc.) minimizes the dispersal of resting spores.

Working an infested field last reduces opportunity to spread large amounts of infested soil to other fields on the farm. Sanitation of equipment before moving equipment from an area known to be infested by clubroot is important to limit the spread of the pathogen into other canola-growing areas in the region. For more information on sanitation, visit the Canola Council of Canada’s publication “Managing Clubroot: Equipment Sanitation Guide” at www.canolacouncil.org/download/130/agronomy-guides/2555/clubroot_sanitation_guide-2.pdf.

Although resting spores can survive for more than a decade, crop rotation is still beneficial. The Canola Council of Canada recommends a minimum of a two-year break between canola crops, and a three-year break with nonhost crops can reduce inoculum levels. Lengthening crop rotations also will slow the development of new pathotypes that can overcome genetic resistance.