Sunflower (Helianthus annuus L.) is a New World crop, domesticated in eastern North America about 4,000 years ago (Blackman et al., 2011). Perhaps due to the development of sunflower relatively recently in human history and its breeding as an oil seed for yield, the efficiency of nitrogen (N) utilization by sunflower is relatively high. Nitrogen application increases plant height but may or may not increase yield.

Oilseed sunflower is grown, as the name indicates, for oil content. Increasing the N rate increases seed protein and decreases oil concentration (Darby et al., 2013). Confection sunflower is grown for human consumption as a snack food. It is dehulled and the kernel is used on salads, and in sunflower butter and bakery goods. It is also incorporated into snack foods and other food recipes.

Nitrogen recommendations in North Dakota are now based on a yield-independent economic production function, while for most other states, including South Dakota, Nebraska and Kansas, N recommendations are based on expected-yield formulas. Formulas include reducing N recommendations due to soil test nitrate (Nebraska, South Dakota, North Dakota, Kansas), organic matter (Kansas, Nebraska) and all states by manure and previous crop credits. In contrast to the implied N response formula, which most often is constructed as [(yield expected (pounds per acre) multiplied by 0.05) less credits], recent N rate experiments in other states have achieved less yield response to N than expected (Darby et al., 2013; Scheiner et al., 2002).

The results from these studies indicate that yield is independent of N rate, meaning that any formula of (Yield X (a factor) = N rate) is incorrect and nonpredictive in North Dakota. Nitrogen rate is related to relative yield within an environment, not actual yield. In addition, the recommendations account for the greater susceptibility to lodging with higher N rates and the relationship between higher N rates and increased sunflower disease. Although in the absence of high wind and disease, higher yield might be possible with higher N rates than those in the recommendation tables or in the future N calculator for sunflower, sunflower growers assume a greater lodging and disease risk if they choose to use higher rates.

The sunflower recommendations are regionally-based and tillage-based. Perhaps due to the deeper rooting nature of sunflower, soil texture had less effect on yield compared with clay texture effect on corn N use efficiency in previous studies. However, at most sites that were planted to sunflowers for the first time in more than 30 years or did not have a deep-rooted crop such as sugar beets or sunflowers within the past five years, yield response was very slight, if any increase occurred. Oil content tended to be near or below 40%, even with zero added N. This would be possible only if these locations have some unaccounted-for deep N. The western North Dakota site that was not planted to sunflower for at least five years experienced a major drought in 2012, followed by relatively wet seasons in 2013-2015, which may have moved N downward in the soil. In the sunflower crop of 2015, the deeper N in this field likely was tapped, resulting in no yield increase with higher N rates and relatively low oil content in the seed. The sites in eastern North Dakota without sugar beet or sunflower in recent memory likewise did not have increased yield with higher N rates and had oil content that, even at the zero N rate, was below 40%.

If deeper soil sampling is not practical, an N nonlimiting area of a full rate of N based on the N calculator or the N recommendation tables should be applied, and about half the N calculator rate should be applied to the rest of the field. Using an active-optical sensor or “best-guess” assessment of color differences and vigor of the N nonlimiting area, compared with the rest of the field, a decision whether or not to apply additional N in-season could be made or not made between stage V-8 to R1 (approximately V12 to V14) using a side-dress applicator or high-clearance applicator (Figure 1). In fields without a history of sunflower, sugar beet or another deep-rooted crop such as safflower, no additional N likely needs to be applied. 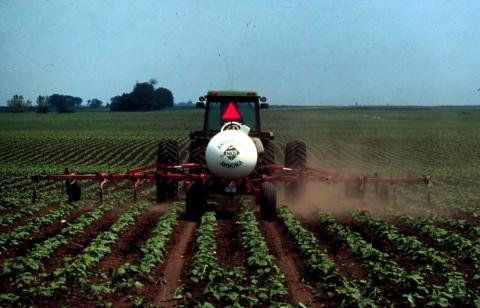 Soil sampling to 2 feet in depth is very important for N recommendations in this region. Including soil test nitrate-N into analysis of N rate vs sunflower yield trials greatly increased the relationship of total known available N to relative yield in all regions. 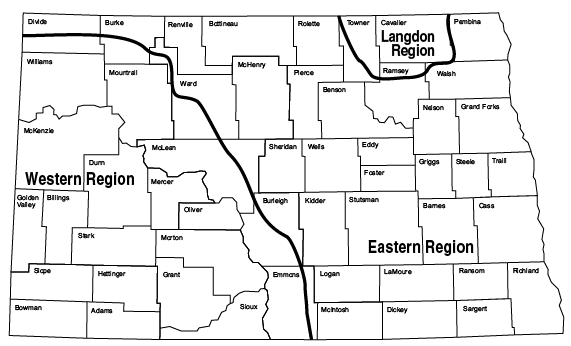 In the state, long-term no-till sites, those sites with continuous no-till for at least six years, required less N to achieve maximum economic yield compared to sites under conventional tillage. Similar results have also been recorded in spring wheat/durum and in corn, whose recommendations also contain reduced N rates for long-term no-till management.

Some harvest loss is likely with lodging, so the upper values of N rate were reduced to limit lodging loss. Although white mold and downy mildew seemed to be related to N rate in experiment observation, only one site was rated for disease in each treatment. This site, north of Dickinson, North Dakota, was rated at harvest for sunflower rust, which is caused by the fungus Puccinia helianthi. The results of the rating are available in Table 1.

Excessive wind resulting in sunflower root lodging or stalk breakage does not happen in every sunflower field every year, but lodging is a concern of most sunflower growers. Several research sites were affected by wind each year, and lodging severity was directly related to N rate (Figure 3).

Although in the N rate experiments all heads were included in yield, sunflower growers would suffer a decrease in harvest efficiency when sunflowers are on or near the ground. Therefore, the N rate is capped, even though small increases in yield and marginal profit might be possible with greater N rates in nonwind-affected growing seasons.

Seed oil content of oil-seed sunflowers always decreased with N rate, regardless of yield response. The economic impact of available N on yield response, seed oil response and N cost is factored into each N recommendation. Highest N rates are moderated due to possible harvestable yield reduction due to lodging. The N rate recommendations are available in Tables 2-13.

High soil test phosphorus (P) values and application of P fertilizer have not been found necessary for high sunflower yields in U.S. studies. There is no evidence that fallow induces P deficiency in sunflower as it does in corn, despite the high reliance of sunflower on mycorrhiza.

Forty site-years of N and P rate experiments were conducted in western Nebraska during 1993 and 1994. Researchers found no effect of P rate on sunflower yield at any location. Most of the Nebraska sites had medium to high soil P levels, but some sites were classified in the low soil P range and yet did not respond to P (Geleta et al., 1997).

Of the 48 P rate experiments in North Dakota and South Dakota, only three had statistically greater yield, with P rates from 60 to 90 pounds of P2O5 per acre, compared with the check. At only one site was the yield increase economically beneficial when the cost of the P fertilizer was considered.

The recommendation for P fertilizer for sunflower in this region therefore is zero. Although the application of P fertilizer can be made and does not decrease yield, neither does it economically increase yield. Soil test P was not related to P response. Sunflower P removal in grain is very low, with only about 10 pounds of P2O5 per acre removed with a 2,000-pound-per-acre seed yield.

Potassium (K) has been studied little in the region for sunflower. Around the world, K rate studies indicate that about 150 parts per million (ppm) from the standard K test in the region is sufficient for maximum sunflower yield.

Sulfur (S) has become a common nutrient that is deficient for many crops in North Dakota. Although sunflower is deeply rooted, and in many soils, the groundwater is high in sulfates, sunflower may be susceptible to early season deficiency. The S soil test is not diagnostic.

A better prediction for possible S deficiency would be noting fall rainfall, winter snowfall, spring snowmelt and rainfall before planting. If any high precipitation is experienced, the possibility of S deficiency is greater.

Loam and coarser-textured soils are most susceptible to S deficiency. If S is anticipated to be deficient, an application of 10 pounds of S as a sulfate or thiosulfate source is recommended as preplant or postemergence before the reproductive stage (R1) of growth.

With the current market for organic foods of all kinds, sunflower lends itself well to certified organic production. For the requirements in North Dakota, contact the North Dakota Organic Advisory Board (www.ndorganics.nd.gov/) for a list of U.S. Department of Agriculture-vetted certifiers.

Organic systems usually are depleted of N, but soil sampling can be helpful in determining the need for supplemental N amendments. One strategy organic growers use is to grow an early maturing crop, such as barley or winter wheat, the year before sunflowers and grow a cover crop of a fast-growing annual legume directly after grain harvest.

Compost also can be used to great advantage. The compost should come from a reliable source, where the manure was brought to temperatures that kill weed seed. Well-made composts can be sampled and analyzed for N content so that a better estimate can be made of N release during the sunflower growing year. A guide to producing and managing compost is available at www.ndsu.edu/agriculture/extension/publications/composting-animal-manures-guide-process-and-management-animal-manure-compost.

Compost also will contain substantial potassium, which might be limiting on very sandy soils, as well as sulfur. Sulfur fertilizers that also can be used include gypsum from natural sources and potassium sulfate (check with the North Dakota Organic Advisory Board for details).

Sunflower is susceptible to lodging and greater susceptibility to disease when too much N is applied, so rates of estimated available N should be conservative and should not exceed 150 pounds of N per acre. No micronutrient considerations are necessary for organic sunflower production in North Dakota.

The original publication was authored by W.C. Dahnke, C. Fanning and A. Cattanach, former NDSU researchers and Extension specialists, 1992.

The National Sunflower Association provided funding for the research that led to this revised publication.

NDSU Extension does not endorse commercial products or companies even though reference may be made to trade names, trademarks or service names.

For more information on this and other topics, see www.ag.ndsu.edu

NDSU encourages you to use and share this content, but please do so under the conditions of our Creative Commons license.
You may copy, distribute, transmit and adapt this work as long as you give full attribution, don’t use the work for commercial purposes and share your resulting work similarly. For more information, visit www.ag.ndsu.edu/agcomm/creative-commons.

This publication will be made available in alternative formats for people with disabilities upon request, (701) 231-7881.