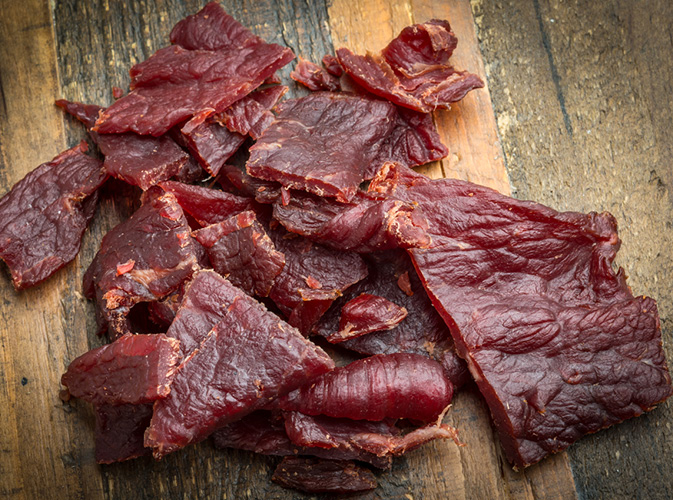 Jerky is a nutrient-dense, convenient, shelf-stable meat product that can be made from just about any type of raw meat ingredients. Its name is derived from the Spanish word “charqui,” which describes dried meat strips. Jerky is produced using combinations of curing, smoking and drying procedures.

Making jerky at home can be much more economical than buying it. Consider that buying a ½-ounce package of jerky costs $1 or more. That is at least $32 per pound for the finished product. Homemade jerky only requires the purchase of lean, whole-muscle cuts such as a rump roast or chuck tender roast, some simple ingredients and a little time. For example, if a rump roast has a retail price of $5 per pound and you can make approximately 40 percent of the purchase weight of store-bought beef into jerky, your cost for homemade jerky would be $12.50 per pound.

Traditionally, jerky was made using the sun, wind and smoke from fires to preserve and extend the shelf life of meat. Drying and smoking results in meat products that have a long storage life, allowing for the preservation of large amounts of meat that could be stored and consumed later.

American Indians dried thin strips of game meats under the sun to make a product called “boppa,” which was preserved without salt or smoke. “Pemmican” was a mixture of berries or suet with pounded dried meat.

Today jerky is produced from thin strips of meat (beef, pork, lamb, venison, poultry) or ground and formed meat. Many varieties of commercial seasonings are available for home jerky making, or you can develop your own recipes by following a few simple steps.

Jerky can be made using whole muscles or ground meats; however, for home processing, whole-muscle cuts are recommended because they result in a safer, more traditional jerky product.

Essentially, any meat source can be used to make jerky, but typically, lean cuts such as beef round roasts or pork loin are used. Lean cuts are more desirable because fat can become rancid during storage, resulting in off flavors.

Can you make jerky from ground meat?

According to researchers from the University of Georgia and Colorado State, “For ground beef jerky prepared at home, safety concerns related to E. coli O157:H7 are minimized if the meat is precooked to 160 F prior to drying.”

While the simplest jerky consists of dried meat, ingredients often are added to improve taste, color and texture. Salt is the most commonly added ingredient and is used to improve flavor, enhance the storage life and remove moisture from the product.

Occasionally, “cure” may be added to the raw meat. Cure is the ingredient nitrite, which typically is added as sodium nitrite, but it also may include sodium nitrate. Nitrite is used to fix the color of the jerky. Nitrite also is a potent antioxidant, which prevents spoilage during storage, and a flavor enhancer.

The amount of cure added is very small, in the parts per million range. When purchased, it usually is mixed with common table salt.

Tender Quick contains nitrite and nitrate, whereas the other products contain only nitrite. The nitrite-only products usually are pink so they are not confused with regular table salt. Be sure to follow instructions on the curing salts because excessive amounts may cause health problems. 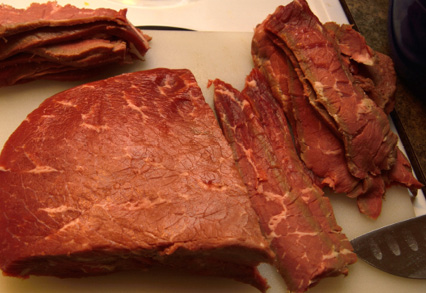 Several methods can be used to make jerky. For whole-muscle jerky, the first step is to slice the meat thinly into strips no more than ¼ inch thick. Having the meat near frozen can make slicing easier. Colder meat also is better from a food safety perspective.

After slicing, other ingredients can be added. The best way to impart flavor into whole-muscle jerky is to use a brine or marinade. Some basic recipes are provided in this publication.

If using a cooker or smoker to make jerky, be sure the product’s temperature reaches at least 160 F to ensure any bacteria are destroyed.

Do not smoke the jerky at lower temperatures and finish at a higher temperature because some bacteria can survive the drying process and not be killed during cooking.

Simply marinating and drying meat does not ensure that potentially harmful bacteria have been killed. Several types of bacteria can survive the drying process and cause foodborne illnesses when the product is consumed. In almost every case, meat must be fully cooked before the drying process starts to kill harmful bacteria. In the past, foodborne illnesses have been associated with the consumption of jerky, which prompted changes in recommendations for home jerky making.

In February 1995, 93 people in New Mexico were diagnosed with salmonellosis due to improperly processed jerky. The processors’ procedure consisted of drying partially frozen beef strips three hours at 140 F, then holding the meat at 115 F for 19 hours. In November 1995, 11 people in Oregon were infected with E. coli O157:H7 found in homemade venison jerky. This jerky reportedly had been dried at 125 F to 135 F for 12 to
18 hours.

These illnesses have raised concerns about the safety of traditional drying methods for making jerky from meat and poultry at home. The U.S. Department of Agriculture recommends that meat be heated to 160 F and poultry to 165 F before the dehydrating process to destroy pathogenic microorganisms.

In addition, take special precautions when making homemade jerky from venison or other wild game. Game, including venison and wild game birds, can become heavily contaminated with fecal bacteria, depending on the skill of the hunter in dressing the animal and location of the wound.

Commercially processed carcasses usually are chilled rapidly, but game carcasses often are held at temperatures that could allow bacteria to multiply. Several universities have conducted experiments on the survival of bacteria during drying.

The general conclusion is that the meat needs to be heated prior to drying and that adding cure (sodium nitrite) to the formulation increases the destruction of bacteria, compared with jerky without added cure. When making whole-muscle jerky at home, sliced meat strips should be precooked in a hot marinade prior to drying. The hot marinade will destroy bacteria on the meat.

Bacteria can spread through a work area and contaminate equipment and work surfaces. To reduce your risk of foodborne illness:

*for 1½ to 2 pounds of lean meat such as beef, pork or venison

1. Prefreeze meat to be made into jerky so it will be easier to slice.

2. Cut partially thawed meat into long slices no more than ¼ inch thick. For tender jerky, cut the meat at right angles to long muscles (across the grain). Remove as much visible fat as possible to help prevent off flavors.

3. Prepare 2 to 3 cups of marinade of your choice in a large sauce pan.

4. Bring the marinade to a full rolling boil over medium heat. Add a few meat strips, making sure they are covered by the marinade. Reheat to full boil.

5. Remove pan from range. Using tongs, remove strips from hot marinade (work quickly to prevent overcooking) and place in single, nonoverlapping layers on drying racks. (Repeat steps 4 and 5 until all the meat has been precooked.) Add more marinade if needed.

6. Dry at 140 to 150 F in dehydrator, oven or smoker. Test for doneness by letting a piece cool. When cool, it should crack but not break when bent. The meat should not have any moist or underdone spots.

7. Refrigerate the jerky overnight in plastic freezer bags, then check again for doneness. If necessary, dry further. Soaking the strips in marinade before precooking is not advised because the marinade could become a source of bacteria. Putting unmarinated strips directly into the boiling marinade minimizes a cooked flavor and maintains the safety of the marinade.

1. Slice 4 pounds of meat (¼-inch-thick strips) with the grain. Use lean meat free of fat and connective tissue.

2. Spread out meat and sprinkle on 3 tablespoons salt, 2 teaspoons ground black pepper and 2 tablespoons sugar. Put the meat in a container and refrigerate for 24 hours.

3. Pound the meat on both sides to work in the spices. Optional: Dip strips of meat in a liquid smoke solution (five parts water to one part liquid smoke) for one to two seconds for added flavor.

4. Make a brine by dissolving ¾ cup salt, ½ cup sugar and 2 tablespoons ground black pepper in a gallon of water. Stir to dissolve the salt and sugar.

5. Bring the brine to a low to medium boil (175 F). Immerse the fresh meat strips (a few at a time) into the boiling brine until they turn gray (one to two minutes). Remove meat from the brine, using clean tongs or other utensils that have not contacted raw meat.

6. Spread out meat on a clean dehydrator rack or a clean rack in the top half of a kitchen oven. If you use a kitchen oven, cook the jerky with the door open for approximately one hour at 300 F, and then cook it for at least one hour with the oven door closed to fully cook the meat. Then lower the oven temperature to the lowest possible setting and dry for nine to 24 hours or until the jerky reaches the desired dryness.

7. Remove jerky from oven before it becomes too hard or brittle. Properly dried jerky should crack when bent in half but should not break into two pieces.

8. Store jerky in clean jars or plastic bags, or wrap it in freezer paper and freeze. For best quality, store in a sealed container and use within two weeks. Refrigerate or freeze for long-term storage.