Field research has been conducted to determine the feasibility of using winter rye as a cover crop preceding pinto bean production. Results of the work are summarized regarding the strategy's impact on pinto bean production, timing of rye termination and weed suppression.

A study commenced at the Carrington REC during fall 2017 with seeding winter rye to provide living ground cover in the fall and spring prior to pinto bean production, providing benefits including protection from soil erosion and aid in weed management. Objectives included determining optimum time for terminating rye based on bean planting date, assessing weed suppression and measuring productivity of the bean crop. The study was completed in 2021, providing a four-year database on the production strategy.

After visual evaluation of weed control associated with trts, post-emergence herbicides were applied across each trial for general weed control. At bean seed maturity, plants were hand-pulled for field drying and threshed via combine.

Average pinto bean plant population was 50,600, 62,300 and 22,100 plants per acre during 2018, 2019 and 2021 (drought season), respectively. The early season plant densities were 11-68% less than the targeted stand of 70,000 plants per acre. With reduced plant populations in three of four trials trials (2020 average stand was 67,400 plants per acre) compared to the recommended stand, farmers should carefully consider planting rates and procedures when using this production system. In each of the trials, plant stands among trts generally were similar to the conventional system check.

Averaged over four years, ground cover, measured by the line-transect method one to two DABP, generally was greater with delay of rye termination near or after planting compared to the conventional check and PP termination of rye (Figure 1 and Table 2). 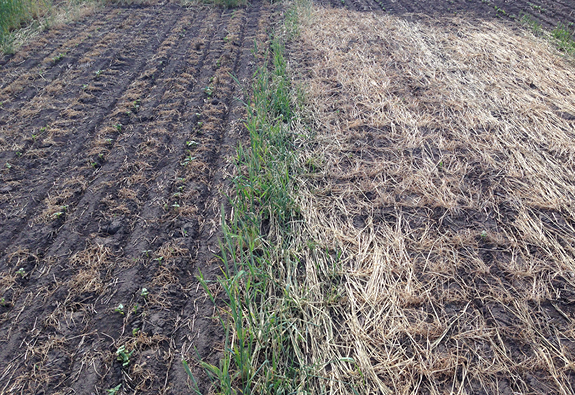 During each year of pinto bean production, topsoil moisture in the trials was reduced by delaying rye termination until near bean planting (trt 5). In addition, rainfall to replenish soil moisture was less than normal (Figure 2) and not timely. Averaged over four years, topsoil moisture, measured within a week of bean planting, generally was greater with the conventional check (trt 1) and PP termination of rye (trts 2-4) compared to rye termination near bean planting (trt 5) (Table 2). Pinto bean plant development (emergence, flowering and maturity) was extended three to 10 days with trt 5 (Table 3). In addition, bean plant canopy closure was reduced 12-20% with trt 5 compared to other trts. 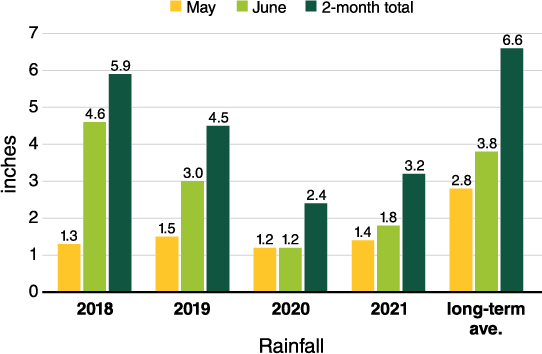 A uniform stand of winter rye will suppress annual weeds through a combination of allelopathy and competition (Ransom et al., 2021). Grass and broadleaf weeds present in this study generally had similar control with the use of PRE herbicides and when rye termination was delayed until or after bean planting, when visually evaluated three to four weeks following planting. For example, in the 2020 trial (Figure 3), green and yellow foxtail control ranged from 95-99% and common lambsquarters control was 85-97% with PRE herbicide (trts 1 and 3) or when rye was allowed to grow until 1-11 DABP (trts 5-6). Rye terminated 20 or 36 DBBP (trts 2 and 4) resulted in 75-81% control of foxtail and 66-81% control of common lambsquarters. Averaged across three years (2018 and 2020-21), foxtail control averaged 87-89% with trts 1, 3 and 5 compared to foxtail control of 71-72% with trts 2 and 4. Weed control generally was reduced with early rye termination (without PRE herbicide) as the lack of live rye and residue allowed weed presence earlier in the growing season. 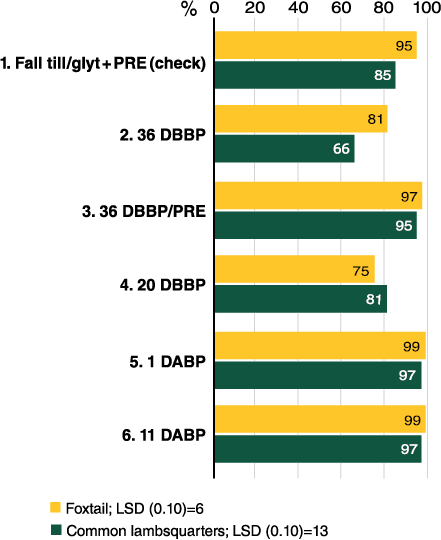 Pinto bean seed yield with preplant terminated rye was similar to yield with the conventional check. Delay in terminating rye until near or after dry bean planting allowed the rye to deplete topsoil moisture that was needed to timely establish bean plants, and negatively impacted bean plant development, canopy closure and seed yield. Dry topsoil conditions during early bean plant establishment throughout the years of the study indicate rye termination at least two weeks before bean planting is suggested with similar environmental conditions as experienced in Carrington. The delay in rye termination did provide benefits of increased ground cover during the crop season and weed control similar as achieved with PRE herbicides. Weed suppression with rye can be considered another management tool to supplement herbicides and other cultural control methods.

Adequate topsoil moisture during bean planting and plant establishment would allow extended benefits of the live rye cover crop at planting while maintaining seed yield potential. Soil moisture status and precipitation forecast should be taken into consideration when determining the best time to terminate rye at a particular location. A site-specific termination approach could be considered when some areas of a field would benefit from extended cover crop presence (i.e., saline soils) or conversely may be at greater risk of dry bean establishment issues (i.e., hilltops).