The current heating plant dates back to 1903-04 when a new heating and power plant replaced the inadequate existing power plant.  The new building measured 45’x85’ with a storage capacity for about 400 tons of coal.  An addition in 1962 to the SE corner of the heating plant removed the coal bunkers, provided room for a new 1,402 H.P. boiler (Boiler #4), and the rail car unloading system was moved and upgraded.  That boiler is currently the oldest boiler. In 1972, an addition was added to the north side of the existing plant to house a new 1,866 H.P. gas boiler (Boiler #1). This boiler was considered an experimental boiler back then and is the one scheduled to be replaced.  The other two boilers, a 1,627 H.P. coal fired boiler and a 1,134 H.P. natural gas boiler, were installed in 1978 and 1990 respectively to replace an existing boiler.

This project will consist of removing Boiler #1, which is the gas/oil boiler installed in 1972, and installing a new boiler of comparable size. Boiler #1 is unreliable and has put the campus at risk for inadequate steam needs. In the last 12 months, the boiler was only used 20 hours due to the unreliability of the unit. In addition, the heating plant is lacking sufficient combustion make-up air and a secondary system will be required when the new boiler is installed.

The new boiler is being manufactured by English Boiler and will arrive in July, 2015. Installation will begin immediately with completion scheduled for December, 2015. 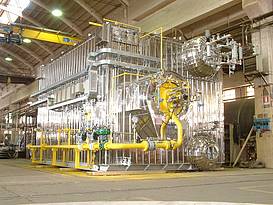 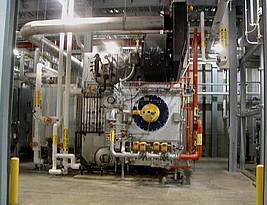