Review of the Canadian Haskaps at CREC

What is probably the largest haskap research effort in the world happens north of our state, in Canada. Dr. Bob Bors, at the University of Saskatchewan-Saskatoon, has led the evaluation and breeding efforts in this area since 2004. https://research-groups.usask.ca/fruit/ In 2007, they released the cultivars Borealis, Tundra, and later, the Indigo series of plants. After 2010, pollinizers Honeybee and Aurora were available. In 2018, USask released the Boreal series: ‘Boreal Beast’, ‘Boreal Beauty’ and ‘Boreal Blizzard’.

The early releases grow and flower really well at CREC but we have never had big crops from them. Of this group, Indigo Gem has the best production due to being partly self-fertile. In a survey I did with people who bought plants through a collaboration with Tongue River Winery and the North Dakota Grape and Wine Association, only a few people indicated that they had acceptable crops. Over 80% indicated that their crops were too small to support commercialization. This is similar to anecdotal conversations I have had from many locations: that a few people have great crops while others have been disappointed by production. I am not sure why it’s been difficult here. We have many genetically different plants for pollinization and the weather is often fine. There are not many wild bees though and the commercial honeybees often arrive too late for haskaps. Yet the Russian plants, which bloom the earliest, often have better yields.

Since the University of Saskatchewan released the first five cultivars, they have evaluated many tens of thousands of seedling crosses. Let’s look at some CREC observations for the new Boreal series of haskap. These plants contain some Japanese genetics which should contribute to larger fruit size, more upright growth and possibly some resistance to false spring growth. But they also have Kuril genetics which are mild flavored, wide, leafy shrubs. 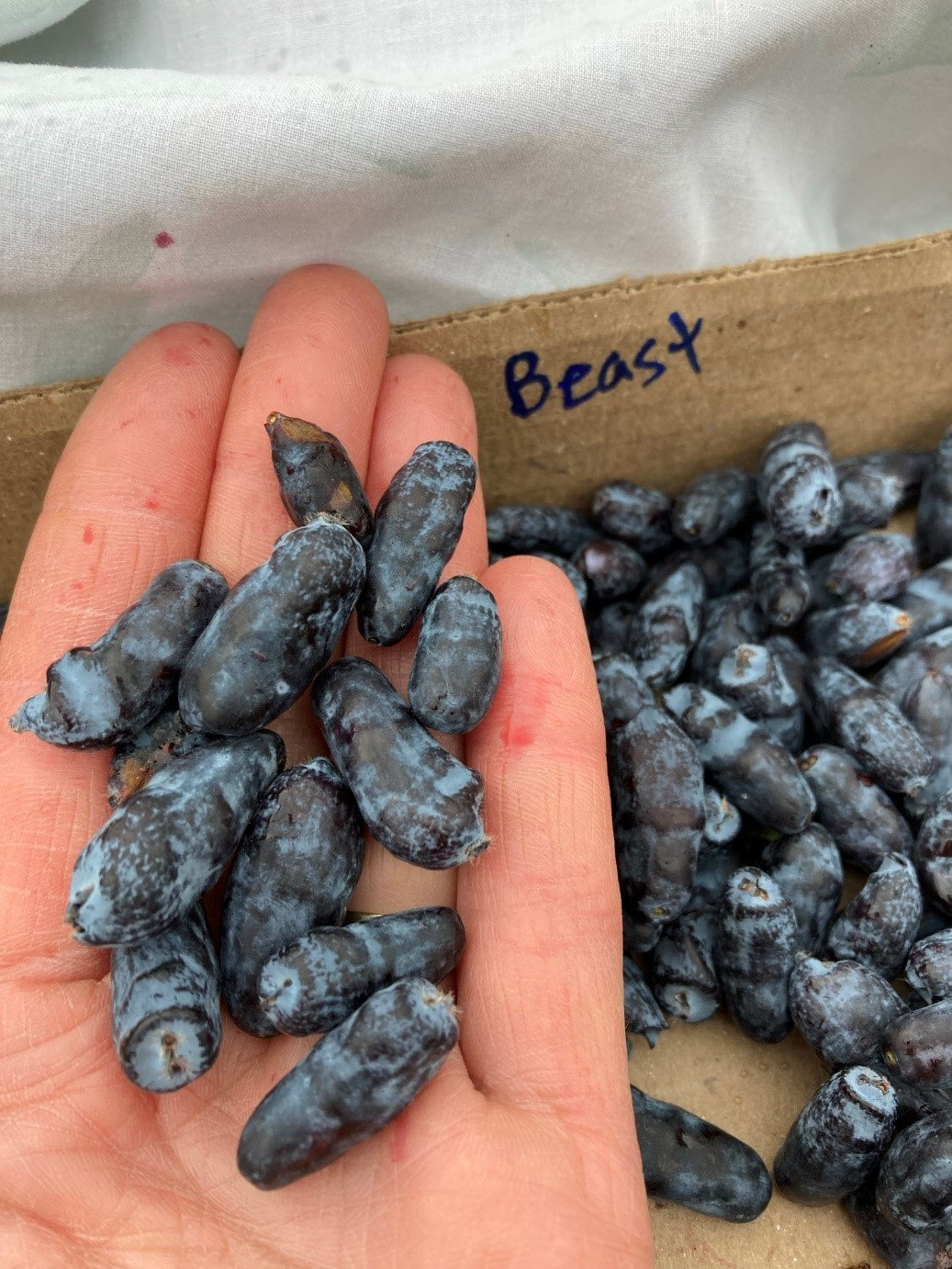 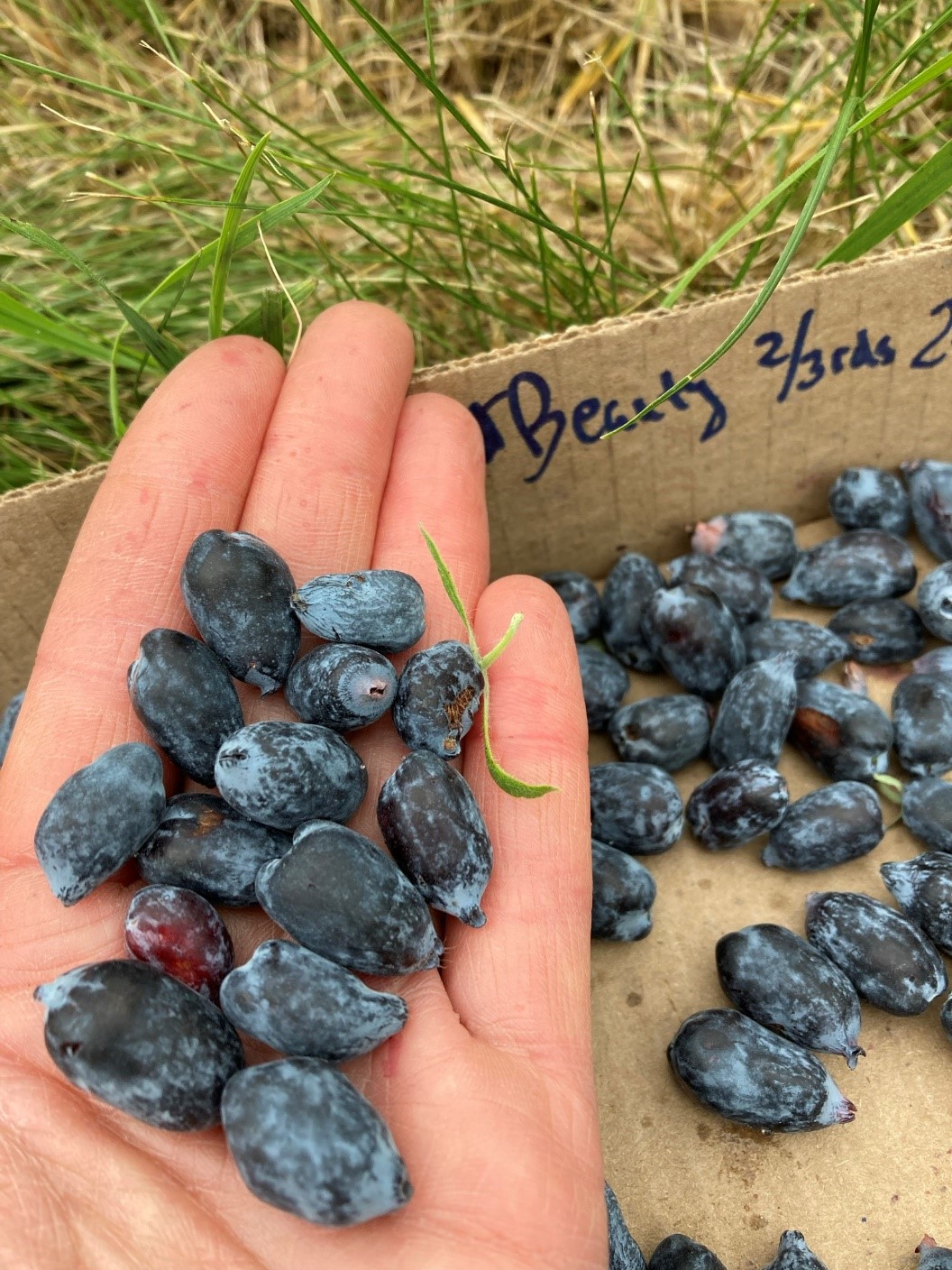 Note: Uneven? Some loose and some tight enough to resist shaking. Hard to pick. 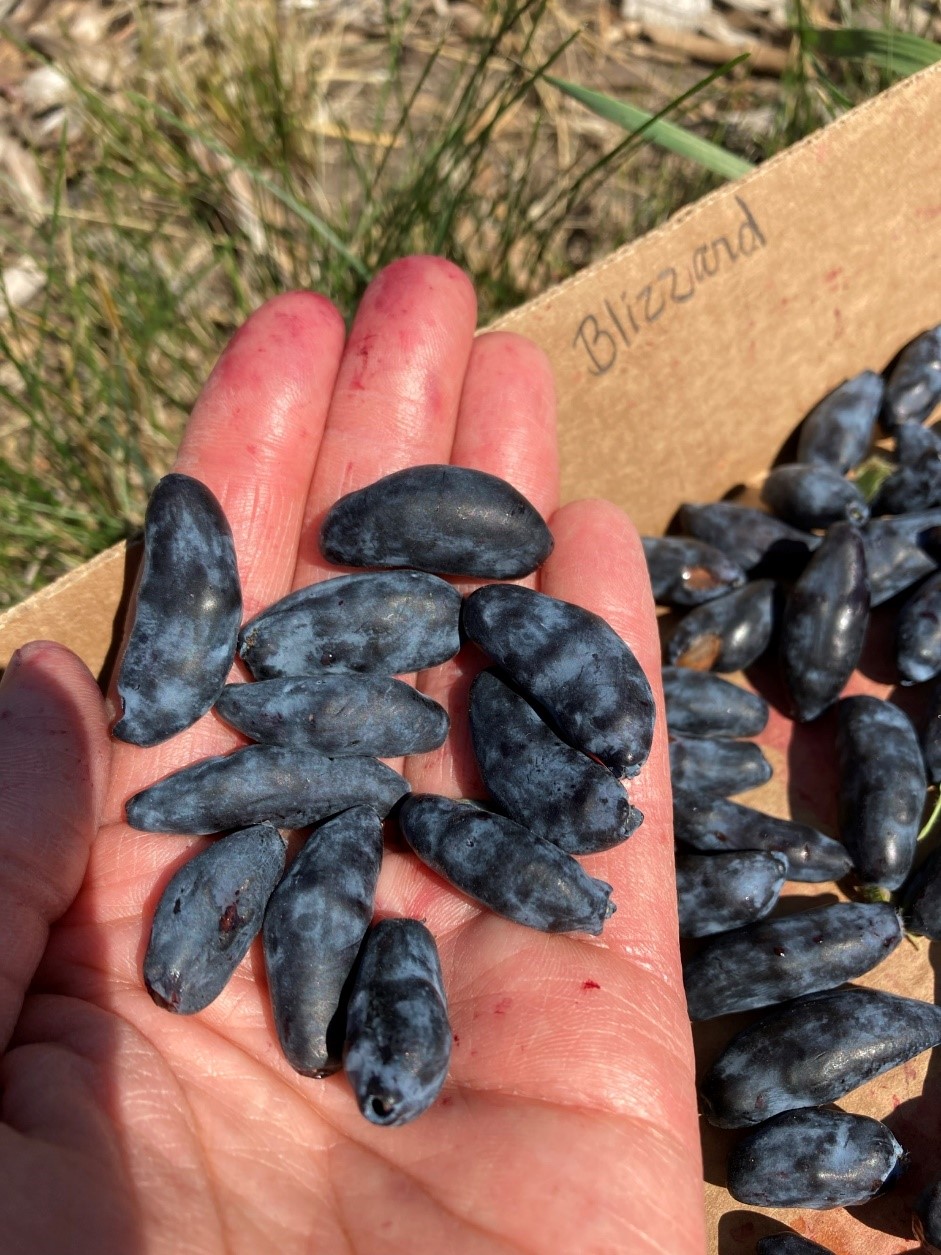 Note: So many leaves for hand picking! Many fruits are tight and tear. Tasty but would not recommend. Frustrating.

At this time, my recommendation on these plants is to try them with reservations. ‘Boreal Beauty’ is preferred in that the picking wasn’t as difficult. However, the ripening seems uneven and I think it will require a couple of harvests, which is OK in a home garden. ‘Boreal Beast’ and ‘Boreal Blizzard’ both have such tight fruits that each one requires a little twist to coax it off of the branch. They both have so many leaves that it makes the process quite difficult.

Sources of plants include: Jung Seed catalog and HoneyberryUSA in Bagley, MN.