Assessment of Canola Response to Top-dress Nitrogen and Sulfur

Nitrogen (N) and sulfur (S) fertilizers are vital in canola production. Farmers in the Northern Great Plains have long been interested in strategies to enhance the efficient use of these fertilizers. These strategies, which include split application of N, application timing, and use of enhanced efficiency N fertilizers (EENFs), have not been widely adopted because of inconsistencies in their impact on canola productivity. While it is a common practice to apply S fertilizer all at planting, some European studies have recommended application of S at bolting to maximize canola uptake and use efficiency.

Average yield was significantly greater at 105 lbs N compared to 75 lbs N/ac (Fig 1). Yields were not significantly different between 15 and 30 lbs S, which was likely due to soil S availability during the growing season. This probably explains why yields were not different between treatments that received S fertilizer before planting and those that only received S at bolting. 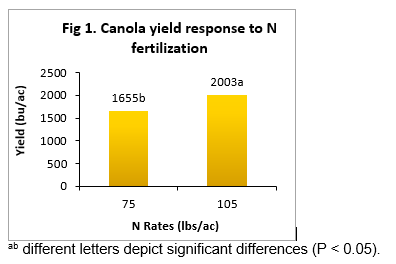 Yields were neither different between split N application and single application as a starter, nor were they different between the different amounts of starter N. Yields from N top-dress with urea were also not different from yields with SuperU top-dress. Prolonged drought that lasted about one week during bolting stage, when N was top-dressed (on dry topsoil), may not have resulted in an important loss of N from urea compared to SuperU, thus explaining the lack of yield impact.

Yields were improved by 105 lbs N, which is the NDSU recommendation rate. There was no impact of split-N application, S application at planting versus at bolting, and no yield differences between 15 and 30 lbs S. Nonetheless, the canola S recommendation of 25 or 30 lbs is the best option for farmers to ensure S is not deficient for the crop. More studies are needed to determine if less S may be needed when low preplant N rates are applied.