During ethanol production, wet distillers grains (WDG) and condensed distillers solubles (CDS) or syrup, are produced and sold mainly as feed for livestock. However, an alternative use of distillers grains as sources of phosphorus (P) and nitrogen (N) has been demonstrated in studies where grain yields and protein of corn and wheat were enhanced by WDG and CDS.

Because of their higher N content relative to P, application of distillers grains as a source of P to soybeans on a low P testing soil could potentially contribute more N than would be recommended for soybeans, potentially impacting N fixation.

Soybean was grown in Carrington on dryland and under irrigation and subjected to four fertilizer treatments: 40 lbs P as granular TSP (triple super phosphate), 40 lbs P as CDS, and 40 lbs P as WDG, plus a control (no P applied), left on the surface, or incorporated for a total of eight treatments. Half of each plot had the urea applied to the TSP and control plots at 30 lbs N, which was equivalent to 30 lbs N supplied by CDS. WDG supplied 66 lbs N. Nitrogen fixation was assessed by analysis of the ureide content and nitrate-N (NO3-N) in the leaves at 5-trifoliolate growth stage.

Phosphorus fertilization did not significantly impact yields at either site.

Average yield on dryland was 60 bushels. This was about five bushels greater (Figure 1) than yields at the irrigated site, probably due to an early frost (September 8 and 9) at R5 growth stage that negatively impacted yields for the irrigated crop. The dryland crop had already attained maturity (about R8). Before R7 growth stage, soybean yields are still susceptible to adverse impact of frost. 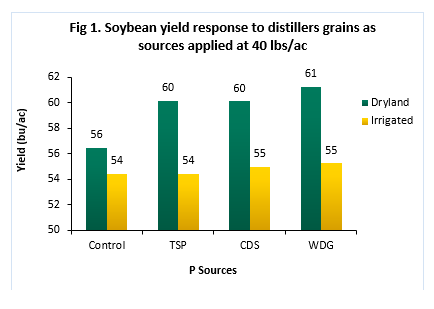 Nitrogen fixation was not significantly different between fertilizer treatments (Figure 2). Despite application of 66 lbs N with WDG compared to the 30 lbs N applied from CDS, or added to the control and to the TSP treatments, the amount was not high enough to cause differences in N fixation. This was likely due to low initial soil N at planting (12 lbs on dryland and 48 lbs under irrigation), and probably due to the slow release rate of N from WDG. Strangely, ureide-N content was low for every treatment, well below the critical range of 1200-1500 ppm. Despite low ureide-N, which ranged from 962 ppm for the check to 1102 ppm for WDG under irrigation, and 906 ppm for TSP to 966 ppm for the check plot on dryland, grain protein was average (on dryland) to high (under irrigation). This suggests that N fixation may have picked up after a slow start, before leaves were sampled at the 5-trifoliolate stage, producing enough N for protein synthesis. 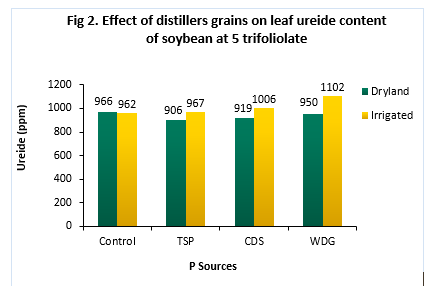 Partial funding for this project was provided by the North Dakota Soybean Council.