Effects of Nitrogen Top-dress at Tasseling on Corn

This trial was conducted at three sites: an irrigated and dryland site at Oakes, ND, and an irrigated site at Carrington, ND.  Fourteen fertilizer treatments were applied. The first six treatments received only pre-plant N at 0, 40, 80, 120, 160, and 200 lbs N/ac. Eight other treatments were splits that either received 0, 40, or 80 lbs N as starter, plus 40 lbs N top-dress at either V8 or at tasseling (VT). 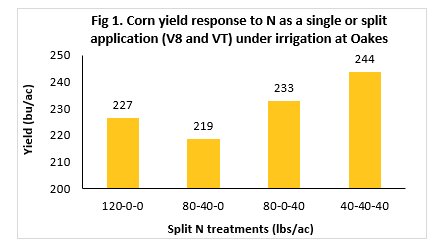 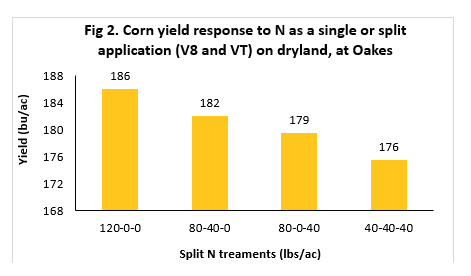 In environments of high rainfall or where irrigation is practiced, split application of N would be recommended to minimize N loss to leaching. Due to lack of significant yield differences between the single and split N applications it would have been uneconomical to have applied N later in the growing season. Nonetheless, split-application of N with most of the N applied at planting, and the rest around V6 to V8 remains a safe strategy to minimize N loss and enhance N fertilizer use efficiency in corn.

Partial funding for this project was provided by the North Dakota Corn Utilization Council.