Initial Evaluation of the 60-inch Corn System in North Dakota

In 2020 there was a lot of interest in learning more about wide row corn (usually called 60” corn). A number of growers conducted on-farm trials and many researchers tested the concept for the first time. Wide-row corn is counter to corn production trends. Over time, the optimum row spacing has decreased, and yields have increased along with it. What is the appeal of growing corn in wider rows? Does it yield more? The answer is no, it will not yield more than standard row spacings. If you want to grow the maximum of amount of corn, the narrower rows are still the recommendation. The goal of wide-row corn is get multiple uses from each acre of land. The strategy is to grow corn plus a cover crop. The cover crop may be for erosion control, equipment floatation, saline management, or grazing/chopping. The success of the system will hinge on how close the yields are between the two row spacings and the inputs that go into each.

In 2020, a research trial was initiated to investigate the feasibility of wide row corn in North Dakota. The study was focused on comparing the row spacings (30” vs. 60”) at various plant populations and also in north-south or east-west row orientations. Row orientations were an important part of the study. Wider row spacings mean that more sunlight reaches the bottom of the plants and the soil surface. In northern latitudes, this can result in differences in shading based on the direction the row is planted. In narrow rows, the effect is minimized due to the tight density of the plant canopy, but when the canopy is opened up, more differences are likely to surface. This trial also tested how the plant-plant spacing might affect yield potential. In 60” rows, the plants are half the distance from each other compared to a 30” spacing at the same plant population. This trial was comparing 32K PLS/ac on 30” rows to the same population on 60” rows. It also tested 24K and 16K PLS on 60” rows. The 16K on 60” would be the same plant-plant spacing as 32K on 30” rows. Average yield of corn grown at 32K/ac on 30” rows is presented (the check treatment), and treatment comparisons are based on the percent yield. This trial was conducted at the Oakes Irrigation Research Site and the Carrington Research Extension Center. Each treatment was replicated four times and arranged in a split plot randomized complete block design.

At Oakes, there was roughly a 13% yield reduction by planting to wide rows versus standard rows when comparing both row spacings planted to 32K PLS/ac (Table 1). With their high-yielding environment it amounted to 28 bu/a. At Carrington, in a lower yielding environment, the yield reduction was 5-6%, resulting in a roughly 6.5 bu/ac difference. Yields were further reduced by lowering the plant population. At Carrington, the yields were reduced by an average of 88 and 77% by reducing plant population to 24K and 16K, respectfully. At Oakes, the reduction was 89 and 73% less yield at 24K and 16K. 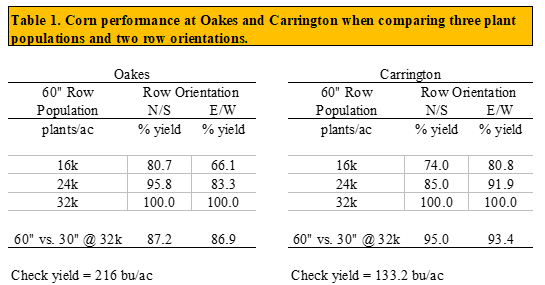 To compete with narrow rows, the wide-row corn strategy needs to compensate by producing more or bigger cobs than narrow rows at the same population. At Carrington, cob length and the number of kernel rows were measured. Cob length was not affected by row spacing, but the wide row corn had an average of roughly two more kernel rows per cob. Plant and ear heights did not change as a result of any of the treatments. 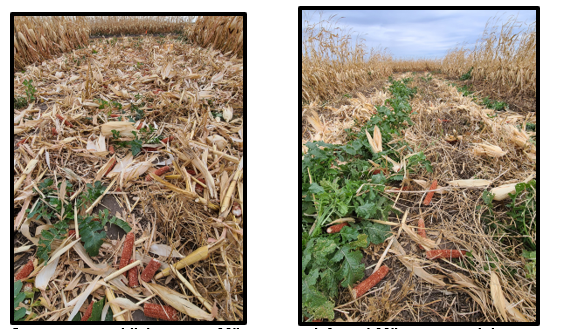 There is still much to learn about how to manage wide-row corn in North Dakota. There are things that could be done differently to increase the effectiveness of the strategy. Hybrid selection will be key component to this system; at Oakes, preliminary data was collected that indicated large yield differences between hybrids at 60” spacings. A large portion of the tested hybrids still yielded less at 60” than 30” spacings, but a portion of the tested hybrids had similar yields at both spacings. There are likely some key traits that determine how well a hybrid will perform on wide rows. Fertilizer placement and input management are also good future research topics as ways to capture more value out of the system. There is also some evidence that if twin rows are used, rather than single rows, the yield loss may be decreased. As it stands, most researchers and farmers are seeing some degree of yield loss from wide-row corn. If grazing is the goal, this may acceptable if it is a small difference in yield, since the cows can capture additional value on that land. With the yield gap as it is presently, this strategy should be approached with caution and tested on a small acreage before making a large investment into the practice. An alternative would be to utilize a mixed strategy, where 60” rows were used on marginal field areas. This would allow the higher productivity areas to produce up to expectation, and hills or saline spots seeded to wide rows with cover crops for soil health improvement and less yield loss.

Partial funding for this project was provided by the North Dakota Corn Utilization Council.