Blockquotes mean something; they're not a way to style your content.

Since the new NDSU templates were applied, several sites have been spotted using Blockquotes in pages for what appears to be the purpose of styling content. This practice is strongly discouraged, as Blockquotes have meaning. They are not just a style or decoration. In the RTE, Blockquote is called Quotation.

The blockquote element is used to indicate the quotation of a large section of text from another source. Source: Wikipedia

Block quotations are used for the long quotation. The Chicago Manual of Style recommends using a block quotation when extracted text is 100 words or more, or at least eight lines. Source: Wikipedia 2

Use of blockquotes is something NDSU students are probably expected to be familiar with as they write academic work. You should use blockquotes in NDSU Web pages following similar guidelines as quoting in an academic paper. Of course, the above examples don't meet the suggested minimum length, but you hopefully get the idea. 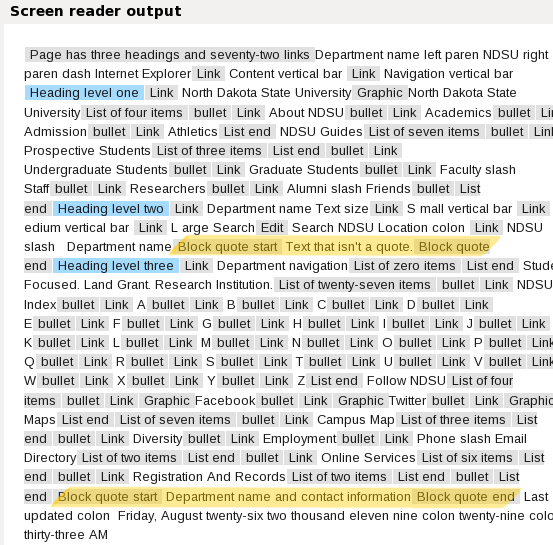