‘Join, play and have a great time’ 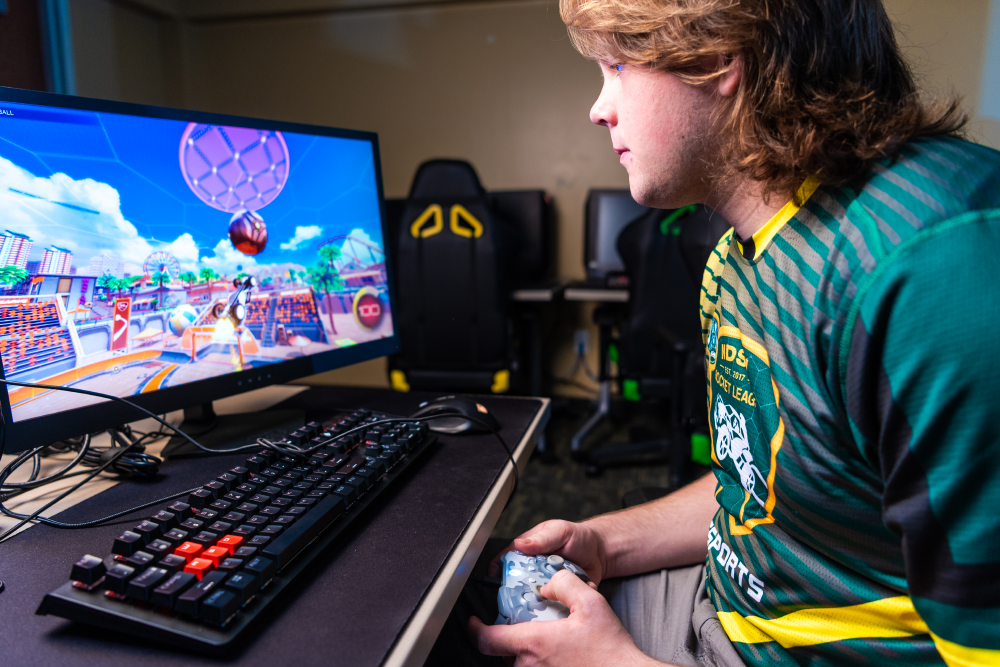 Students have many opportunities to get involved in the growing world of esports at NDSU.

The Rocket League Team and League of Legends Club, plus the esports lab in Thundar’s Game Room, give students the ability to play popular multiplayer games while building communities that are fun and competitive.

Trey Dew, president of the Rocket League Team, says esports are a great way to get to know other students in a low-stakes environment.

“The club, basically, is all about people who want to play at that game, either at a highly competitive level or a casual one,” said the senior computer science student from Horace, North Dakota. “It’s a nice community of people that get together and have a great time.”

The Rocket League Team is based around the game of the same name. Rocket League, said Dew, is essentially “soccer for cars.” Dew had been playing the game for many years before joining the club his freshman year at NDSU.

He can relate to the nervousness of joining a new club or organization. He almost didn’t join the team because he didn’t know anyone in the club. Now, he encourages anyone interested to join the Discord server, which has nearly 200 total members.

“You literally don’t have to say anything,” he said. “Just see what’s going on, feel out the vibes. If you want to join in a voice call sometime or send a really cool clip that you hit in game, do that and we’ll hype you up. We’ll support you literally every step of the way and hopefully, you get more involved after that.”

The team is a part of the Dakota Collegiate Rocket League, a group comprised of Rocket League teams from schools in both North and South Dakota. This fall, the team is inviting every school to attend and compete against each other in-person in the club’s first-ever LAN tournament.

Another addition to esports at NDSU will open in spring 2023. ThundarGround is a major renovation of the esports lab in the Memorial Union. The new esports area will be more than 1,200 square feet, and include 25 to 30 gaming stations, two seating areas for console gaming, table space for players who bring their own laptops and a small team/coaching/lounge area. Both the Rocket League Team and League of Legends Club were involved in the design and planning for the new renovations.

“I think everybody likes to play games,” Dew said. “It’s super accessible for everyone. You can just pick it up, join, play and then have a great time. I think that’s why esports is a great thing.”

Create your own NDSU experience and apply today.