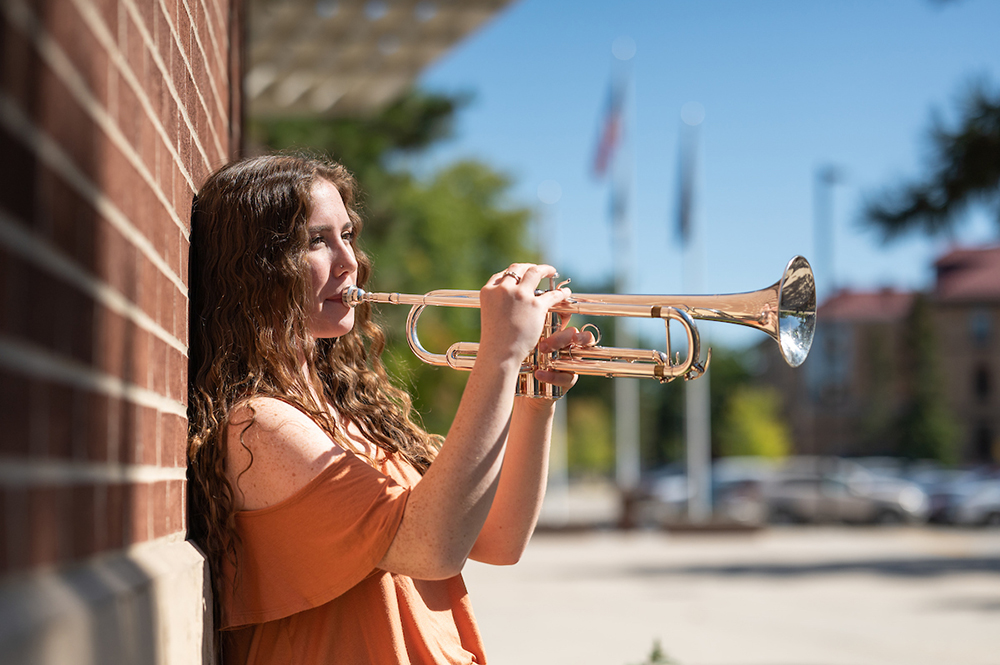 Volunteering and service are woven into the fabric of NDSU. Many of our students readily share their many talents with the broader community.

Cadence Decoteau is one such person. A skilled musician, she is a first-year NDSU student majoring in instrumental music education.

Her primary instrument is the trumpet, and she uses it to pay her respects during veterans’ funerals as a volunteer with the Fargo Memorial Honor Guard.

“I play taps because I feel the veterans deserve a live taps player for what they did to protect and serve us,” said Decoteau, who is a member of the NDSU’s jazz band, university band, marching band and a brass quintet. “I volunteer as much as I can, as much as I’m needed.”

She earned her taps certification at the International Music Camp in 2018, and has volunteered ever since. Decoteau has played taps at funerals for four veterans since the start of the semester, following 28 times when she was in high school.

“As I play taps, I feel a lot of different emotions,” said Decoteau, whose hometown is Devils Lake, North Dakota. “Initially, I feel happy that I can be there for the family. While I play, there is a strong sense of sadness that washes over everyone present. It’s a really hard emotion to describe because I don’t know the people who I play for, but I feel a connection to them and their family. Afterwards, I still feel sadness for the people that lost their loved one, but I feel grateful that I was able to be there.”

Decoteau is quick to praise her NDSU instructors. Their understanding makes her volunteering possible.

“Everyone who has allowed me to miss class has helped because funerals don’t work around my schedule – I change mine to make it there,” she said. “Without the help of everyone around me, I wouldn’t be able to play taps.”

That sense of sharing and helping is evident throughout the campus, with the NDSU Volunteer Network coordinating a variety of service projects for students.

"Cadence is a great example of the servant heart we see in our students,” said Carol Cwiak, faculty liaison for the Veterans Alliance Organization, known as VALOR, and associate professor of emergency management. “In her service to veterans’ families, she illustrates the power each of us has to help and support others.”