Research opportunities from the ground up 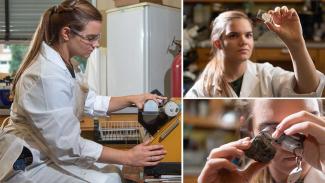 Anne Dieter loves to roll up her sleeves and get her hands dirty.

For two years, the junior earth science education major has assisted NDSU researchers who are exploring intricate soil patterns at the microscopic level. The work is called micromorphology – a branch of soil science that examines the features and fabrics in soils at a microscopic level.

“Our end goal is to study patterns of the whole soil including sand, silt, clay, plant residues, worm casts, insect droppings and pore spaces; all at varying locations and depths,’’ said Dieter, who grew up on a farm near Danvers, Minnesota. “I’m on the production end of the work. I get soil samples, inject with resin, slice, carefully polish and evaluate quality and notable features before sharing them with my professor.”

Dieter has a strong work ethic and excels academically, attributes that led to her being asked to join the research efforts of Department of Soil Science faculty members Jay Goos’ work in soil fertility initially, and now David Hopkins’ research in soil micromorphology.

“My work includes the subjects of soil science, geology, biology and I use equipment like tile saws,” said Dieter. “It is really a peek into different options of what I can do in my career, and it’s getting my foot in the door for research in the future.”

Dieter hopes to be a teacher, and she honed her techniques by giving poster presentations and hands-on demonstrations with the public during the Becker County Fair in Detroit Lakes, Minnesota, in August.

For her, the NDSU experience means opportunity.

"I’ve learned a lot of various skills here at NDSU. The staff here truly wants you to succeed and definitely helps along the way.” Dieter said. “I urge prospective students to come here and do the best they can do. Take a look around, and maybe someone will find you, too.”

Start your own NDSU experience today.