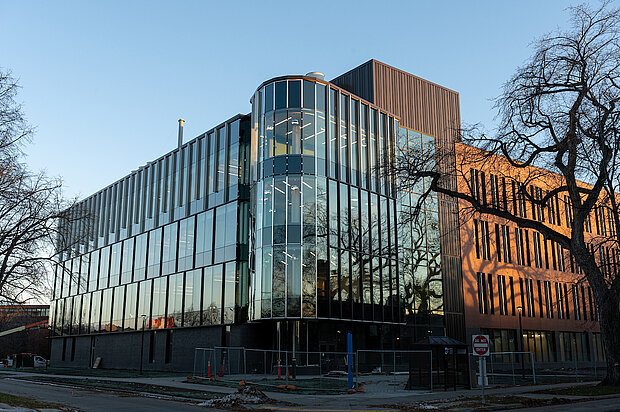 A ribbon cutting ceremony is scheduled for NDSU’s Sugihara Hall on Monday, Jan. 10, at 10 a.m. inside the building’s northwest main entrance.

The new science building is named for James M. Sugihara, a longtime NDSU faculty member and administrator who died in 2019 at the age of 101.

“I cannot think of a more appropriate way to memorialize Dr. Sugihara’s life and contributions than by naming NDSU’s newest science building after him,” said NDSU President Dean L. Bresciani. “His profound legacy will continue to live on through the next generation of research.”

Sugihara’s biography is a story of struggle and success.

In 1939, Sugihara graduated from University of California-Berkley. But at the time, opportunities in the petroleum industry were limited for Japanese-Americans. The talented young chemist opted to continue his education in graduate school.

His plans were interrupted by the start of World War II. Sugihara was among more than 110,000 Americans of Japanese ancestry sent to internment camps. He was held first at a horse-racing track on the outskirts of San Francisco and then moved to a camp in Topaz, Utah.

After his release to continue his education, Sugihara earned his doctorate in chemistry at the University of Utah in 1947. He quickly moved up that university’s faculty ranks, reaching full professor in 1955.

In 1964, NDSU offered Sugihara a new opportunity – dean of its College of Chemistry. He was warmly welcomed, and Sugihara quickly became a university fixture as an internationally recognized research scientist, and his kind, caring demeanor made him a respected instructor and campus leader.

During his career, he published 56 reports on his sponsored research, many in journals of the American Chemical Society. In 1978, the U.S. Department of Energy sent him to Moscow to speak about geochemistry with Russian oil experts.

His other positions at NDSU included dean of the College of Science and Mathematics, dean of the Graduate School, director of research administration and acting vice president for academic affairs.

Sugihara retired from NDSU in 1989 and was awarded professor emeritus status.

Sugihara received NDSU’s Blue Key Doctor of Service Award in 1972 and an honorary doctorate in 1998. The NDSU Department of Chemistry awards the James and May Sugihara Scholarship to incoming freshmen or current students who have a high academic profile.